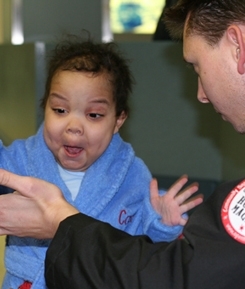 Open Heart Magic brings hope to children struggling in hospitals, reinvigorating their youthful enthusiasm and helping them get better. Volunteer Hospital Magicians use the power of magic and laughter to energize and strengthen seriously ill children in Chicago area hospitals and aid their healing.

Sean McCarthy didn't expect to be fighting tears his very first day as a volunteer for Open Heart Magic. As one of more than 60 volunteer "Hospital Magicians," he's learned since then that anything can happen when you dedicate your time and your heart to help others – and he passes this sense of hope and wonder on to each sick child he visits.

Open Heart Magic uses the therapeutic power of magic and laughter to energize and strengthen seriously ill children in Chicago area hospitals, and aid their healing. Hospital Magicians are able to tailor one-on-one performances that are personalized and interactive for each child, regardless of age.

Why magic? According to Open Heart Magic, there are scientific studies from the fields of education, social work and psychology showing the benefits of magic as a tool to gain trust, decrease tension, enhance cognitive function and more.

From its very beginning, Open Heart Magic has been a volunteer-driven organization. The Hospital Magicians are all volunteers who commit to 12 weeks of intense training at "Magic University," where they learn everything from close-up magic to how to engage and empower kids in a hospitalized setting.

According to Diego Gonzalez, Manager of Magician Recruitment, Partnerships, and Operations, since its launch in 2004 Open Heart Magic has grown the number of Hospital Magicians to 60, and they expect to have almost 100 Hospital Magicians by the end of 2013. "All our volunteers are working professionals in the Chicago-land area who are passionate about helping kids in tough situations," says Diego.

So what had Sean fighting tears that very first day after graduating from Magic U?

"An unbelievable thing happened to me on my very first day on my own at the hospital," he relates. The first patient on his list was a 10-year-old boy. Sean walked into the boy's room and his parents were standing by his bed. As he was taught, Sean introduced himself and said that he was with Open Heart Magic. He asked if the boy wanted to see some magic.

Sean performed maybe 3-4 tricks for them. When he was finished, he thanked them and noticed all three of them were smiling. The patient and his parents all thanked Sean for stopping by as he walked out of the room. Walking down the hall, Sean thought, "Wow, that was a really great experience for my first room on my first day!"

A couple hours later, after seeing several more patients, Sean was finishing his shift when he ran into the father of that first little boy, coming back into the hospital with some take-out food for the long night ahead of them. When he saw Sean he said, "Oh, I'm so glad I saw you. I just wanted to tell you that we think what you do is amazing. We've been here for a few days and that's the first time my wife and I have seen our son smile. I just wanted to thank you again."

Sean was absolutely floored. "I think I managed to say, ‘Thank you', but that's about all I could get out as I felt myself starting to well up," he remembers. "I knew we would have an impact on kids and their families during difficult times, but I never expected to see that impact so soon."

Sean was hooked. He talks about how that first night was not the exception, but the norm. He's had similar inspiring, incredible experiences throughout the last six months as a Hospital Magician.

Diego and Open Heart Magic use VolunteerMatch as their main online recruiting tool to find volunteers like Sean. In fact, Diego relates that about 50% of their volunteer candidates connect with the organization through VolunteerMatch.

"Our volunteers have always been the secret sauce of Open Heart Magic," says Diego of dedicated people like Sean. "They are the lifeblood of our organization. These are the best volunteers in all of Chicago."

"There is nothing like seeing a child smile or making parents laugh when you know they're going through really difficult times," Sean says of his volunteer work. "It's humbling to wear the Magician jacket and an honor to be able to serve in this way."