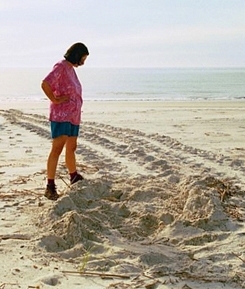 A part of the park system since 1935, Fort Clinch is one of the most well-preserved 19th century forts in the country. The Park aims to provide resource based recreation like swimming, hiking and fishing while preserving, restoring and interpreting its unique natural and cultural resources.

People call Sandra Baker-Hinton "Turtle Lady." It's not because she looks like a turtle, and it's not because she owns a bunch of them as pets. Sandra is an artist specializing in beautiful watercolors, and she also works with acrylics and fused glass. So why the strange nickname?

When she lived in Georgia, Sandra would often vacation on Cumberland Island, just north of Florida off the east coast of Georgia. She would see young girls out on the beaches doing something called "Sea Turtle Patrol." She always thought to herself, "If I lived here, I would do that."

In 2002 Sandra made the permanent move to nearby Amelia Island. She first found an art studio for her painting, and then she found VolunteerMatch. While browsing the website she happened upon the profile of Fort Clinch State Park, located in Fernandina Beach on Amelia Island. She contacted them directly.

"I feel I'm doing important work," says Sandra of her beach patrols. She monitors sea turtle nests and dead turtles, as well as horseshoe crab nesting areas. "Through learning about the sea turtles I have become passionate about them."

Sea turtles, which are federally listed as endangered, face a number of both natural and man-made threats, including predators, commercial fishing and the sea turtle shell trade. Each year thousands of hatchling turtles emerge from their nests along the southeast U.S. coast and enter the Atlantic Ocean, but only about one in 1,000 to 10,000 will survive to adulthood.

Simple actions like reducing your amount of plastic garbage or not using helium balloons can make a difference for sea turtles, and organizations like the Sea Turtle Conservancy are educating consumers about how to get involved, including providing opportunities to become volunteers like Sandra.

Sandra loves her early morning ATV rides on the beach and has integrated photography into her art as a result. She contributes impressive photographs to the Park for use in publications, interpretive panels and displays. She even chronicles her experiences and the changing scenery each day in an online diary.

Through her generous and dedicated volunteering, Sandra has gained a reputation on the island and a following for both her art and her adventures with the sea turtles. In April 2012 she was named District 2 Volunteer of the Month for Florida State Parks.

Marie Bucher, Park Services Specialist and Sandra's nominator, said, "Sandra captures the beauty we hope all visitors are able to see and experience. We truly enjoy her presence in the park and treasure her giving spirit."

Sandra herself just feels lucky to have the opportunity to volunteer doing something she loves, and that helps drive her art. She credits VolunteerMatch with getting it all started.

"I have a soft spot in my heart where VolunteerMatch is concerned," she says. "When you first move into an area, you don't know what the resources are. It was nice to find the site because it started me on a path that led to 10 wonderful years doing some of the most rewarding work any lay person could have."