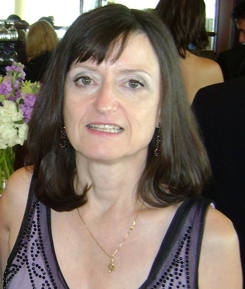 The National MS Society is a collective of passionate individuals who want to do something about MS now—to move together toward a world free of multiple sclerosis. MS stops people from moving. We exist to make sure it doesn't.

In2Books, a program of the ePals Foundation, was created in 1997 to enhance the intellectually stimulating work available to students in low-income neighborhoods. In2Books promotes ambitious literacy learning in grades 3-5 by having students engage in authentic reading and writing experiences with adult pen pals.

Check out In2Books and ePals opportunities on VolunteerMatch.

Detroit native Debbie Francis has always been a people person. The oldest of eight, even at home she was always surrounded by people. When Debbie grew up and raised two children, her daughter once scolded her for talking to strangers in the checkout line.

"I taught [my children] to never talk to strangers," says Debbie. "It made me laugh inside when my daughter repeated the lesson that I was teaching her."

Debbie's latent ability to connect with others made it natural for her to turn to volunteering. Her parents also played a large role in her passion to help others, particularly the younger generation. "My mother was always a person who believed in giving to charity," she says. "My father was a hands-on dad when I was young. He played with his children along with all the other kids in the neighborhood. He was 18 when I was born, so, I guess my passion to help children comes from this background."

The first time Debbie volunteered was during her late teens, when she kept score for Little League Baseball in East Detroit. Since then she has volunteered for a variety of organizations, from coaching Little League and cheerleading, to raising money for March of Dimes and the Juvenile Diabetes Research Foundation.

She has served as a board member for local organizations, fed and housed the homeless with the Macomb County Rotating Emergency Shelter Team (MCREST), and taught fifth and sixth graders catechism.

For Debbie, she never thought she was going out of her way to volunteer. It was simply part of her everyday life. "I never considered the things that I was doing as volunteering," she says.

In 2007, Debbie was diagnosed with multiple sclerosis (MS). By 2008, she could no longer work. But it never occurred to her that she would stop volunteering. "Volunteering was not a new experience, but a continuing experience," she says. "I have always been a proponent of education and life-long learning. Helping others has always been a passion of mine."

From her computer, Debbie was able to continue volunteering. Her first volunteer work following her MS diagnosis was reading for the blind for the organization now known as Leader Dogs for the Blind.

"The first thing that I did after being unable to work was to search for a charity that I could help without doing physical work," she says. She volunteered at home by recording her voice on a computer, burning the recordings onto discs, and mailing them to the organization. "Reading for the blind was a perfect fit because I could help people while learning at the same time," she says.

For Debbie, volunteering offers her a way to contribute to society now that she can no longer work. She is particularly passionate about working with children because of her own experience growing up with seven other children in her household. "My dedication to children began by protecting my younger siblings," she says.

Through computers, technology, and the Internet, Debbie has been able to keep up with her passion for volunteering and working with children. She now volunteers with In2Books, an organization that pairs an adult with a student ranging from third to sixth grade. The pair reads five books every year and exchange letters discussing them.

She is also raising money for the National Multiple Sclerosis Society in preparation for an MS walk in Detroit this May. "My illness causes me great fatigue," she says. "That's why doing things by computer makes it easy for me. All I really need is my computer."

Debbie suggests that organizations need to make an extra recruiting push towards potential volunteers who are disabled, in order to let them know that their needs will be accommodated. "Technology definitely helps assist people with handicaps," she says. "Advertising helps people to know what is out there."

From her lifelong experience as a volunteer, Debbie has learned the importance of volunteer contribution, regardless of ability. Volunteering produces healthy results for not only the organization, but the volunteer, as well.

"Volunteering is good for the soul," she says. "Holding the door open for someone carrying packages is charity just as much as donating money to UNICEF. Every little bit that a person can do will make a difference."