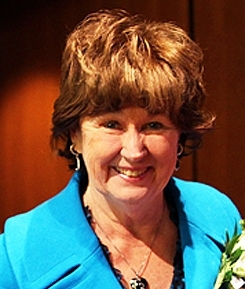 Vivian Littlefield has always been passionate about nursing. After all, she served as the Dean of the University of Wisconsin-Madison School of Nursing for 16 years, and was active in local, state and national roles related to health and health care.

Then she was asked to serve on the Board of the Badger Red Cross Chapter in Madison, Wis. That was the beginning of a 25-year relationship that has reshaped the entire Red Cross organization and expanded Vivian's own impact beyond anything she would have imagined.

When she joined the board of the Badger chapter, Vivian learned that the American Red Cross humanitarian mission matched her own professional commitment and professional preparation as a nurse: To save lives, promote health and safety, and respond to individual and family needs through service to communities. She was also intrigued by the importance that nursing played in the early development of the Red Cross, and how Red Cross nurses, including Jane Delano, Clara Noyes and Julia Stimson, played strategic roles in the development of American nursing.

Vivian became the Chairperson of the Badger chapter board, and served on the State Service Council. She was also the volunteer chair of the chapter's Health and Safety Department. While the chapter was searching for a new Executive Director, Vivian stepped in to fill the interim role.

Managing a Response to 9/11

Vivian was excited about this opportunity, and felt confident that she could lead the chapter effectively given her previous involvement with chapter activities. Not long after she accepted the position, she came into the office one morning and was waved over by the staff to listen to the news. The date was September 11, 2001, and Vivian was running a Red Cross chapter.

Almost immediately, the normal functioning of the organization at a state and national level was thrown into chaos. "We were into planning 'what if,'" Vivian relates. Her role as leader was to assure the staff that they were up to the challenge of responding to what was needed elsewhere, and that they could continue to provide the services their community needed and expected.

Volunteers and staff from around the area were deployed to ground zero, the neighboring New York Chapters and several points in-between to help with the overall American Red Cross response to the crisis. As increased numbers of people wanted to contribute blood, Vivian coordinated with blood services that depended on the Badger chapter for volunteer management. "I believe that I was able to lead in a challenging time," Vivian says.

Vivian also served on the Regional Committee of the Red Cross and on the National Nursing Committee. Twelve years ago she became the National Chair of Nursing, a position that is over a century old.

"The Red Cross at the local and national levels respected my background and experience," says Vivian. She felt that the work they gave her was important, and used her leadership skills and professional nursing experience.

When Vivian had been the National Chair of Nursing for nearly seven years, the Red Cross was facing a significant financial crisis and a large number of staff people were eliminated. The layoffs included the Chief Nurse and all the resources allocated for supporting the 20,000 volunteers in nursing that relied on the Chief Nurse, the National Chair and National Nursing Committee to guide and support their efforts across the country.

In short, Vivian was left with no support or resources for a large national program. Then she was asked to lead Red Cross Nursing as a volunteer.

Vivian was well aware that the volunteer nurses looked to the Chief Nurse as an important leader, advocating and guiding their efforts. She also recognized how difficult leading would be when funding and even an administrative home were not identified. However, she still said yes. "I could not let Red Cross Nursing be eliminated," Vivian explains.

She gathered a group of nurse and non-nurse Red Cross leaders to become the revitalized National Nursing Committee. "We had a planning session as to how we would proceed to not just 'save' Red Cross Nursing, but to revitalize it," Vivian recalls. She and the members of the National Nursing Committee worked to strengthen the State Nurse Liaison Network, created working groups, and requested that the Chief Nurse title and position be reestablished.

The Red Cross leadership heard them and their external supporters. Ten months later, they had a new Chief Nurse. When the new Chief Nurse, Sharon Stanley, arrived in March of 2009, they had a functioning State Nurse Liaison Network, an administrative home and a promise of funding for critical activities. "We had a base to build on," Vivian says.

Today there is an infrastructure in place to support volunteer nurses across the country, a plan for the future of how nurses can assist in meeting corporate and business line goals in health related activities, and a strong National Nursing Committee with members who are advocates and advisors for what nurses can do to assist in meeting the mission of the Red Cross. "I feel good about where we are given the challenges," says Vivian. "But I know there are still challenges ahead."

"Vivian has been the glue that has held the nursing function together while it went through some difficult reorganization," says Sharon Stanley. "Without her, nursing could not have revived in the way it did."

Now Vivian is stepping down from her role as National Chair of Nursing. "I hope to be supportive of Red Cross and Nursing in the future, but believe it is time after 12 years to let others assume the major leadership roles," she says.

She feels sad that she won't be as large a part of the next steps, connecting with so many colleagues daily. But there is also joy that there are talented leaders ready to step up and continue the mission. "I'll be in the cheering section!" she exclaims.

Volunteering with the American Red Cross allowed Vivian to continue her involvement in her profession of nursing post retirement, gave her new challenges, new learning and a lot of great colleagues. "Vivian was more than a volunteer for the Red Cross," says Sharon Stanley. "It was her full time job, but most of all, it was her full time mission."

"Volunteering gives you new learning opportunities," Vivian says. "It brings you in contact with committed, interesting people and it allows you to give back and to use your past learning and experience." So to others she only has one thing to say: "VOLUNTEER!"

Vivian, we think that is excellent advice.