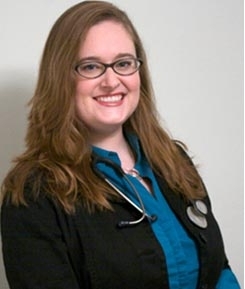 Alisha Beth Griswold remembers being pulled by her mother in a little red wagon as they marched with a group of women, all holding signs. A toddler, she couldn't read the signs but recalls her mother's pin with a broken coat hanger on it. She remembers elementary school classmates saying they'd seen her mom on TV, telling people to "vote no on prop-something."

When Alisha learned that her mother was a lobbyist for reproductive rights, she knew only that it involved stuffing lots of envelopes and leaving messages on people's answering machines. As it turns out, her mother also sat on the board of Planned Parenthood for several years.

Alisha's maternal grandfather likely told his daughter, as he'd later tell his granddaughter, that the true measure of someone's character is their ability to fight for other people's rights - rights that they themselves may never have to demand. Legally blind, he fought hard for the blind community's rights, eventually making his way to the Kansas State House of Representatives, where he worked to enact legislation that protected civil liberties.

With two powerful leaders of service in her family, Alisha was taught at an early age that she must leave the world better than how she found it; how she would accomplish that was up to her.

A few years ago Alisha was searching on VolunteerMatch for an opportunity that inspired her. She found a posting by the Medical Reserve Corps (MRC), a network of medical and non-medical volunteers who support regional public health initiatives during disasters and other times of community need. She had an interest in emergency medicine and was taking First Responder courses, so it seemed like a good fit.

When Hurricane Katrina hit mid-semester, she wanted to jump in her car and head down to Louisiana. "You know that feeling when something awful happens and someone tells you, 'It's going to be okay?'" Alisha explains, "Even though you know the road ahead isn't an easy one, there's something instinctively comforting about going through it with someone at your side. That feeling, that security - I really wanted to give that to others."

Alisha admits she’d been concerned that she wouldn't be qualified for MRC, that the doctors and nurses would look down on her because she hadn't completed any medical training. She soon learned that volunteers with no medical experience or training whatsoever fill important roles: stuffing envelopes, posting flyers, providing snacks, taking meeting summaries.

Alisha says, "Some tasks take only twenty minutes a week, but a lot of twenty minute tasks can pile up. Logistics are a big part of our mission. Fifty percent of our volunteers don't have medical training, and they don't really need to; not every member of my unit is interested in being deployed." Alisha, however, did go on to complete her First Responder program and Emergency Medical Technician (EMT) certification training that following spring.

Alisha assures any new or potential volunteers, "Don't be intimidated by the initial process; you will find your place in no time. Don't worry about not being trained. If you need training, your organization can point you in the right direction."

Like her mother and grandfather, Alisha hears the call to volunteer as her duty to humankind: "I'm really inspired by the brevity of life. If this short eightyish years we have on this planet is all we ever get, I'd really like to make the best of it."

"A primary theme in my daily life," says Alisha, "is my belief that it's up to me to actively seek justice and work to protect my community. If we all assume someone else will do it, nothing will ever get done. So, one by one, we lend our voices to this greater cause, and what starts as a whisper becomes a roar for something larger than ourselves."

When asked what volunteering adds to her life, Alisha replies, "It's a really good moral compass. I'm learning a lot about myself, probably most significantly to be patient. A lot of disaster preparedness is waiting; you rush to get the training and then you wait and hope you never have to use it."

Tammi Lynn DeVille is the author of Changing the World on A Tuesday Night, which features profiles of 50 people from around the country who work full-time jobs or have otherwise busy lives, but find time to volunteer for a cause they are passionate about. You can follow her on Twitter at twitter.com/tammideville.