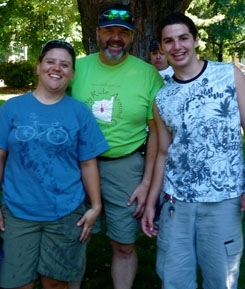 4Results is a nationally recognized, award winning mentoring program that serves local children with the greatest needs. Qualified adults are matched with children ages 7-18 who reside in Clark County, Wash. and are either receiving mental health services, in foster care, children of prisoners or for any other reason considered high-risk youth.

Check out 4Results opportunities on VolunteerMatch.

A few years ago Willie and Brenda Buchanan realized they weren’t finding the personal satisfaction they wanted at work. They decided to become volunteer mentors to be able to impact one person and see firsthand the chain reaction they could have on that person’s live and the lives of those around him.

When asked why they chose to mentor together, Willie simply says that they "work well as a team." Now two years later, their team has grown by one, and they’ve realized that not only have they helped their mentee, but "Matt" has impacted their lives in countless ways.

Willie and Brenda found 4Results Mentoring on VolunteerMatch. 4Results is an award-winning program that matches qualified adults with kids aged 7-18 in Clark County, Wash. These are kids who are receiving mental health services, in foster care, children of prisoners or for any other reason are considered high-risk youth.

A few years ago one of 4Results’ biggest grants ran out, and they had to cut a large portion of their full-time staff. With such decreased capacity, they were worried they wouldn’t be able to recruit the mentors they need to serve their kids. Then 4Results signed up as a Community Leader on VolunteerMatch, and their number of successfully recruited mentors has been rising ever since as they welcome dedicated volunteers like Willie and Brenda Buchanan to mentor the kids who need their guidance.

"Matt" was one such kid. He spends much of his time caring for his physically disabled Mom, but when Willie and Brenda first met him there was a lot of tension in their relationship and he was struggling to show her respect. His therapist and his mother were both worried and hoped the mentoring program would get him out of the house and allow him to make some close friends.

Willie and Brenda have been a great example of a solid marriage for Matt, since he comes from a single-parent home and has not seen his dad in quite some time - he's been able to see the positive interaction between them. More importantly, Willie has been an excellent role model for Matt to learn how to treat women with more respect.

From the beginning Willie and Brenda saw in Matt what he didn't yet see in himself. "We like to do things that are new to all of us and bring him along and experience it with him," they say. The couple are avid hikers and bikers, and when they challenge Matt with a long hike or ride, he used to insist that he wouldn’t be able to do it.  But, as Brenda has pointed out, "He always does it!  He does just fine every time."

From the perspective of Matt’s mother and his therapist, the mentoring relationship has done wonders for him. Over a year ago his therapist closed his case because he had achieved all the objectives on his treatment plan. And even though mentors with 4Results are only required to commit to 12 months, after two years this trio is still going strong.

Perhaps even more amazing than the impact the mentoring has had on Matt is the difference it’s made in Willie and Brenda’s lives. "We spend a lot of time laughing and joking.  It's often a great stress relief for me," says Brenda. The mentoring experience (which can also be done virtually) has given them a different perspective of the world, as they now "think about someone else rather than just each other."

Willie and Brenda feel that their relationship with Matt has given them a gift that’s far greater than the guidance they’ve given him. "He's been good for us," says Brenda. "And knowing we're good for him gives us a sense of purpose - a reward a lot of people don't get to experience."