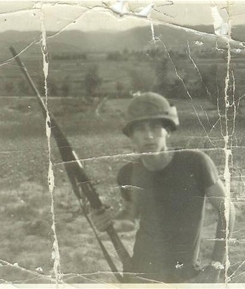 The Meals On Wheels Association of America (MOWAA) is the oldest and largest organization in the United States representing those who offer meal services to people in need. Because of the magnitude of the problem, they know it cannot solve it overnight or with a single project or initiative. MOWAA's vision is to end senior hunger by 2020.

Donald Sanders desperately wanted to just help and do something productive. But his past kept coming back to haunt him.

As a Vietnam War veteran, Sanders had seen a lot of things that he didn't want to remember. The 20-year long military conflict exacted a huge human cost in terms of fatalities, including more than 58,000 U.S. soldiers. It was following the Vietnam War that the term "post-traumatic stress disorder" was coined.

Sanders first took illegal drugs a few days after surviving a helicopter crash that killed most of his crew. Covered with blood, scared, and in shock, he was ready to kill himself to evade capture. The gun jammed, and he lived.

Back at home Sanders struggled with crowds, finding them uncomfortable. Even among all those people, he still felt alone in his mind. Decades later the problem finally caught up with Sanders when he was arrested for possession.

A psychiatrist at the VA Mental Health Clinic at Mather Field suggested he do some volunteering to keep him from "isolating" - something that veterans have in common. So he chose to start volunteering in his local area.

Easy huh? Who would refuse free labor? Not so for Donald: "On the application I checked the box stating that I'd been convicted of a felony," he said. "I was told they couldn't use me."

The rejection was devastating.

"I had to pick my heart up off of the floor," he recalled. "I was feeling pretty worthless after that."

Sanders situation isn't uncommon. Many ex-offenders like Donald find volunteering, and certainly getting a job, difficult. Even though these people may be highly experienced and passionate about the work of an organization, they run into procedural walls.

For many organizations, policies regarding engaging volunteers with criminal backgrounds vary widely. The American Red Cross's policy is to run mandatory background checks on all potential volunteers. If there's a hit, it's very difficult to place the volunteer in a suitable position. As the organization states, background checks help them achieve a more efficient and safer work environment - they have an accountability to the American public.

Of course, background checks aren't the whole issue - the real question is what to do with committed volunteers who can't pass. SHARE! in Los Angeles County accepts volunteers even if they have felony convictions. As their philosophy states, all experiences can be of benefit to others and everyone should have a chance at personal growth and change.

Many organizations also make a point to be accessible to those with criminal backgrounds as part of their mission.  In the UK, Wokingham City Council has come up with an idea to help convicted criminals turn their lives around. Recruiting people who have committed petty crimes to help with property maintenance in the local area is one way to look after its elderly and frail residents. By introducing a maintenance service, offenders have an opportunity to put something back into the community.

For Sanders, there has been good news – his persistence has paid off and he has been given a second chance at last. Recently he got a call from Meals On Wheels saying they had approved him to help set up meals and wash dishes. Also, he has joined a team of volunteers who care for Putah Creek, a watershed near his Winters, Calif., home.

With two volunteer opportunities to look forward to, Donald can now be productive and helpful like he always wanted.