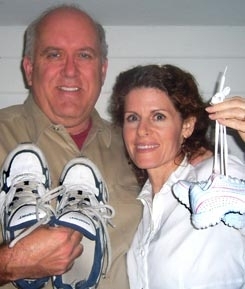 Warm Soles
Organization profile
Warm Soles is a project created by Cora, Fred and Michael Judd in an effort to provide good quality shoes and warm jackets to children and adults living in Naray, Afghanistan.

For more information, send an email to WarmSoles@gmail.com.

Check out VolunteerMatch for opportunities where you can help other causes with important needs too.

With today's news filled with so many reports about other people's problems, it is easy to feel frustrated. How can any of us reach out and help directly? It's useless.

Not so, says Cora Judd.

With her husband, Fred (pictured), and son, Michael, Judd has done something wonderful by just reaching out. She helped start a project to collect shoes and coats stateside and send them to families in Afghanistan – a country famous for its cold.

It was U.S. Army Major Warren Cusick, Fred's cousin stationed in Afghanistan, who inspired the effort. While docked at Camp Naray, the U.S. Army base in Kunar, eastern Afghanistan, Cusick worked closely with Afghanis being treated at the base for medical emergencies.

Cusick's descriptions of how the locals were in dire need of shoes and jackets, often showing up in threadbare clothing and poor shoes, put Judd into action.

The Southern California home maker gathered the few nice pairs of shoes she had lying around and made a flyer for friends and neighbors asking them to do the same.  Then she asked about jackets. As she gathered the goods, she boxed up what she had and started shipping it regularly to Cusick.

After five weeks, Judd's informal efforts – completely unconnected to any official nonprofit organization – had netted shipments of 276 pairs of shoes and 87 jackets.

In just a few weeks, the family's efforts were enough to stock a boutique. And Judd says more shoes are still arriving.

Not only is the project, which the Judd's call Warm Soles, comforting Afghanis, it's teaching the Judds about the big hearts of their own neighbors.

"Nearly every time we stepped out of the door for the first three weeks, we found more shoes and jackets left anonymously," recalled Judd. Donors included an elderly neighbor who brought a sack full of new white baby shoes, a home-bound neighbor who donated a check, and a Cub Scout troop.

The Judds are not alone. People around the county are pitching in to help causes directly by reaching out to friends and their community. Not only is this kind of citizen action the seed for future nonprofit organizations, it's an antidote that helps people who believe that nothing can be done to think otherwise. (Warm Soles is not a nonprofit.)

"It's hard to imagine from sunny California, but Afghanistan is having their coldest winter in 30 years," said Judd. "VolunteerMatch really inspires me. When I read the profiles and see the collective energies represented, I feel our little effort really is part of an awesome force of change."

Cora and her family have been successful enough to prompt an article in the local newspaper to 30,000 residents in April giving Warm Soles a push forward in getting the word out.

Answering a need from so far away is something that Cora takes to heart.

"The main pleasure of volunteering has been what I've learned about taking action. Responding to a plea for help crowds out any cynicism I may feel about the world," she said. "My best advice is to take action of any kind. Doing something positive changes the media's message from one of hopelessness to one of opportunity!"

How about you? We're certain you'll find an opportunity to give back at VolunteerMatch. Log in today!