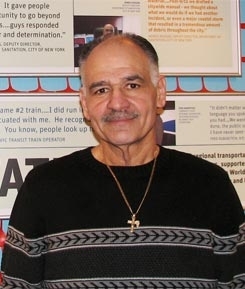 The Tribute WTC Visitor Center provides educational programming for visitors and a central place for the 9/11 community to gather and share their stories.  Through walking tours, exhibitions, and programs, the Tribute Center offers "Person to Person History," connecting visitors with people who directly experienced the events of February 26, 1993, and September 11, 2001.

Check out more than 100 other walking tour volunteer opportunities.

Anthony Palmeri's dad was the unofficial fix-it man for the Queens borough of New York.  Then as now it was a community of new arrivals and the struggling working class, and after helping his neighbors with their problems, Mr. Palmeri made it a point to charge for parts but never for his time.  As Anthony recalls, "That’s where I got my ideas about service -- from my dad."

For 23 years Anthony has served the City of New York working in the sanitation department.  He also serves his community of Lodi, New Jersey as a volunteer firefighter.   On the morning of Tuesday, September 11, 2001 Anthony was at his post with the New York City Department of Sanitation.  That's where he heard the tragic news.

His immediate thoughts were of the first responders, the firefighters and emergency workers whose jobs he knew so well.  He began to imagine the massive efforts that would soon be underway. "I knew I was going to get down there, no matter what.  I have a small but powerful connection with the fire department," he recalls.  "I thought if I can get down there and even just move a rock, a piece of steel or a piece of wood, if I can make their job one step easier to get to someone who was trapped, that would be my contribution to them."

The request was quickly put out to city workers, asking for those that wanted to volunteer with the search, recovery and clean-up efforts to step forward.  Anthony didn't hesitate. "From the minute I got there my whole focus was to get everything back to normal, back together, focusing on the firefighters. I told them, 'I'm here.  If you need me, I'm here.'"

Eventually the smoldering ruins were brought under control. For nine months Anthony working side by side with emergency workers and volunteers from New York City and all over the nation – all coming to that corner of Lower Manhattan to contribute their time and skills.

On June 1, 2002 when the city decided to officially close the site, some volunteers still hadn’t reached their own sense of closure.   The work was done but Anthony felt that something was not yet right: "As many others did, I felt an emptiness, I felt like the job wasn't complete," he says.

Four years ago, Anthony learned about the Tribute WTC Visitor Center, an educational program for visitors and a place where the 9/11 community – survivors, residents, rescue workers and volunteers – could come to connect and share their stories. Since its opening in September of 2006, the Visitor Center has welcomed over 1.7 million visitors. The Tribute Center offers what it calls "Person to Person History" by connecting visitors with people who directly experienced the events of September 11, and the staff and volunteers of the Center have each shared their unique personal accounts of that unforgettable day.

One of the most intimate experiences that they offer is the Guided Walking Tour.  Two to three times each month Anthony makes his way back down to the Visitor Center to spend about two hours giving personal guided tours. The tour groups most often consist of 20 to 25 people, though they are sometimes much larger.  Anthony says, "The bigger the better."

Remembering his father telling stories of friends lost in World War Two, Anthony helps to preserve the memories of 9/11 by telling visitors of his own experiences from late 2001 and early 2002. "It’s important to not make this just a story about an attack. It's not just a story, not just facts, there's a heart behind it.  It's important that we don't forget the camaraderie and all the goodness that came out of it. The people who are gone should be remembered in a very special way." He also insists, "It’s important to remember that there are people who are still suffering from loss, the medical conditions that survivors and rescue workers are dealing with – the mothers, fathers, sisters and brothers who were left behind and still carry this burden."

Anthony loves to see how many people after so many years are interested in learning more. People from all over the world continue to visit the Tribute Center, and Anthony treasures the opportunity to let them know how much it means to him and the rest of his community that they have come. After all these years he still carries his notes, though these days he doesn't need a reminder of what to say. The note cards serve a different purpose. "Sometimes I get a little bit emotional, so I look down at my notes," he says.

When asked about his most memorable moments volunteering Anthony says, "What really makes me feel great is when I can bring family members or friends here.  There are people who were very understanding and supportive when I was down here for nine months and I get to share this with them.  By explaining how this helps me feel and heal, and by expressing the good things that I get with this work, I think I make them feel the same thing.  It's my gift to them."

Tammi Lynn DeVille is the author of Changing The World on a Tuesday Night, which features profiles of 50 people from around the country who work full-time jobs or have otherwise busy lives, but find time to volunteer for a cause that they are passionate about. You can follow her on Twitter at twitter.com/tammideville.