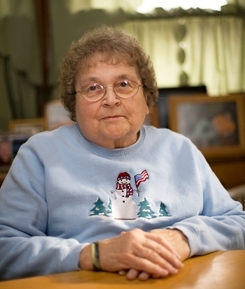 The Maine Troop Greeters is a non-profit organization of veterans, men and women who support our armed forces serving overseas by greeting troops who arrive at Bangor International Airport.

Joan Gaudet has spent her entire life taking care of people: as both a mother of eight children and, for nearly thirty years, as a Certified Nursing Assistant at a nursing home in Orono, Maine.

After retiring, and with her children grown and out of the house, Joan was looking for somebody new to take care of. With few friends and fewer hobbies, the life of this seventy-five year old had slowed to a crawl.

And then one day an invitation came from a friend: "Would you like to go to the airport and greet a returning flight of U.S. troops?"

And with that, Joan found a passion that transformed her life. For the past six years, she has been a full-fledged member of the volunteer organization the Maine Troop Greeters –- much longer than she imagined herself volunteering.

"You get addicted to it,"says Joan. "You never want to miss a flight."

Since 2003, Joan has been there to greet many of the 900,000 plus soldiers and Marines that have passed through the Bangor International Airport, the main departure and arrival point for troops serving around the world, on their way to or returning from Iraq and Afghanistan. She has even seen her own grandchildren deploy to Iraq. Through it all, Joan views her volunteerism as an addiction.

It would have to be. Being a troop greeter is no normal volunteer effort. It is a life-consuming commitment. It means being on call 24 hours a day, 7 days a week, 365 days a year to drop everything and head to the airport at a moments notice to greet a troop flight. It means putting the aches and pains that come with growing old aside  and getting up at 3am, in the middle of a cold Maine winter, to be there to shake a hand, give a hug, and offer a cell phone to call home.

For Joan, being on call all the time is no small feat. After three knee operations, she now uses a walker to get around. Not surprisingly, Joan's biggest fear is of falling down.

"When I first started going out at all hours to greet troops, my children would call,"tells Joan. "If it was dark, they would leave messages saying 'Where are you? It's after dark.' Finally I called one of my daughters and I said 'I'm the grown-up. I can go out after dark!'"

On a trip home for Christmas in 2004, Joan's son Aron Gaudet, a celebrated filmmaker, witnessed her greeting a returning troop flight first hand and decided the amazing volunteer efforts of the Maine Troop Greeters was a story worth telling.

Today, Joan's story as well as the stories of two other troop greeter -- World War II veteran Bill Knight, and retired Marine Jerry Mundy -- are the focus of a film, The Way We Get By, directed by Aron Gaudet and opening in theaters across the country. The film will also be broadcast nationally on the PBS program "POV" this Veterans Day.

Aside from greeting the troops with open arms, Joan has found the greatest satisfaction getting to know the soldiers and learning about their families. And as every mother and grandmother can relate, she's happy to welcome them into her home, but can never say goodbye.

"I'd never give it up,"says Joan. "As long as I can make it to the airport and troops are going through, I'll be there."

Learn more about Joan and her story.