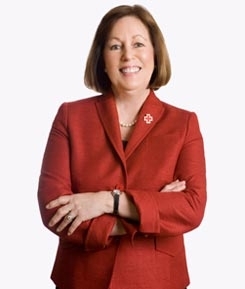 The American Red Cross shelters, feeds and counsels victims of disasters; provides nearly half of the nation's blood supply; teaches lifesaving skills; and supports military members and their families. The Red Cross is a charitable organization – not a government agency – and depends on volunteers and the generosity of the American public to perform its humanitarian mission.

Check out American Red Cross volunteer opportunities in your community.

In a world reinforced on all sides by messages about spontaneity, it's not easy to spot the champions of preparation. Grab life now before the moment passes by, we're reminded. Seize the day. Act now.

That's why when it comes to planning, Pam Farr is a hero. As national chair of volunteers for the American Red Cross, America's premier volunteer organization, Farr is both a key executive leader and a spokesperson for emergency planning

It's all part of a singular commitment to success for Farr. From her perspective, whether the focus is on finance or disaster planning, taking time today to lay the foundation for future growth is the only way to ensure success.

Farr started her career as a management consultant at McKinsey & Company, and today manages a private equity holding company in addition to supporting numerous charitable activities.

Farr serves as volunteer partner to President and CEO Gail McGovern, an employee-volunteer executive partnership unique to the American Red Cross. The National Chair of Volunteers is the organization's advocate for Red Cross volunteers both inside the organization and to the public.

She also helps the CEO achieve the organization’s strategic priorities, ensuring that volunteers are an integral part of the work that goes into achieving each goal.  Together with staff, these volunteers support, train and educate millions of people every year.

Serving so many takes extraordinary planning – and even then it's impossible to predict what crises may be on the horizon. Farr saw this up close on September 11, 2001. At the time she was the board chair of her local Greenwich, Conn. chapter of the Red Cross.

Even with decades of experience responding to disasters, the Red Cross had never faced what happened that day as air travel and other critical aspects of mobilization were frozen.

In Greenwich, which is just an hour north of the World Trade Center, thousands of families had loved ones working in and around ground zero.  As the morning unfolded, distraught relatives arrived at the chapter offices for assistance.

"We were in the middle of the disaster," recalled Farr.

Despite the shock, the chapter sprang into action. Within minutes, relief staff arrived to help the families. Within days, the volunteer leadership was working with chapter staff to raise money for a mobile kitchen to feed emergency response teams. And over the next few weeks, Farr and others attended memorial services for all those who were lost from Greenwich.

The Red Cross eventually formed an unprecedented response campaign that over the next five years grew to support tens of thousands of 9/11 victims and their families.

Farr served as an advisor on the Red Cross's September 11 Recovery Program, which supported long-term recovery efforts for families who had been affected by 9/11. In 2004 she became the organization's national chair of finance, advising the Washington, D.C.-based organization's financial team on matters that influence the condition and direction of the entire Red Cross.

Like many volunteer leaders at national organizations, Farr, the mother of five, believes her experience at her local chapter was crucially important.

"I understand, having come out of the field, what it's like to be on the ground," she said. "I have the chapter perspective, which is much different than being in Washington. Sitting in finance meetings, I was often the only person with field experience."

Since her appointment to national chair last September, Farr has had time to think about how best to support the organization's growth through volunteer service. Last year was among the organization's most challenging ever. The Red Cross responded to 71 national disasters, including devastating California wildfires, a record number of tornadoes, and some of the worst Midwestern flooding in memory – all during a recession.

A big part of being able to respond to so many events, says Farr, is making sure the skills and expertise of Red Cross volunteers are paired with the parts of the organization that can most benefit.

"People value the community service they are able to provide as American Red Cross volunteers," she said. "Ninety-seven percent of Red Cross volunteers plan to continue their service and 96 percent would recommend the Red Cross to a friend as a place to volunteer. Still, we strive continuously to do even better in creating excitement among volunteers by providing meaningful opportunities to serve."