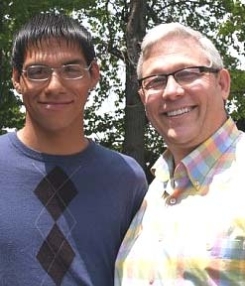 It was 1961 and JFK was still in the White House. Exhorted by the president to "ask what you can do for your country," a legion of young men and women were shipping out to communities around the globe to serve.

Gary Helton was still in grade school in rural Illinois at the time -- too young to sign up for the Peace Corps, but definitely old enough to be inspired.

"I recall it as the first of many calls to volunteer that came over the next 45 years," he says today. "It was powerful."

Nearly five decades later, Helton can look back on close to a lifetime of asking what he can do for others. And while he says his own stint in the Peace Corps was definitely a high point in his personal service history (he served in Thailand in the late 1970s), Helton is equally thrilled by the work he's doing to give back right now.

"I often describe myself as a 'career volunteer,'" said Helton. "I'm frequently looking for other ways to make a difference in my community and the world."

After the Peace Corps, Helton went into teaching. Today, even as a thirty-year veteran employee at an airline in Orange County, the spirit of education, training, and mentorship still pervades his life as a volunteer in summer programs for juveniles and preschoolers, and Head Start.

For the last two years, he has also been a mentor and role model in Big Brother Big Sisters for Salvador, a high school student in the area.

"The attribute that I am most proud of is that he's kind and generous to others," said Helton. "He often places their needs above his own even when he is in great need himself."

But Helton could be talking about himself.

"Volunteerism provides me a sense of accomplishment unlike any other past time," he said. "You can read a book about helping the disadvantaged, but when you actually do something to make a difference; it's rewarding as ever."

Helton says VolunteerMatch gives him an easy way to go online and quickly find volunteer opportunities in his own local ZIP codes.

"It couldn't be easier to find what's waiting out there for you than by clicking on VolunteerMatch," he said.

How about you? There's a reward waiting for everyone who wants to give back at VolunteerMatch. Get started: Find yours today!