As the world leader in volunteerism we feel a responsibility to unite our broader community, and to use this moment to become stronger. 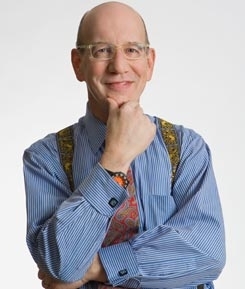 MS stops people from moving. The National MS Society exists to make sure it doesn't. The organization helps each person address the challenges of living with MS. In 2007 alone, through its home office and 50 state network of chapters, National MS Society devoted over $136 million to programs that enhanced more than one million lives. Volunteers at the National Multiple Sclerosis Society are integral partners in its vision for a world free of MS, contributing valuable resources (time, knowledge, skills, and leadership), and infusing the organization with the energy and passion necessary to end MS.

That may seem odd for someone who has spent two decades battling a seemingly indomitable disease, but the Atlanta employment lawyer and adjunct professor of law has a unique vantage point on the MS movement's progress. His father and aunt lived with MS; his sister lives with MS; and Johnson received his own diagnosis in 1990.

After an initial exacerbation, Johnson has been largely symptom-free. Whether this is luck or his disease-modifying drug is impossible to say for sure. But he keeps taking the drug. He quips his worst symptom is survivor guilt — the sense that he feels better than he deserves.

Johnson joined the Society's National Board of Directors in 1995 and began a four-year term as chair in 2005. He says he has been pleased with the growth in the Society's emphasis on supporting research. Pondering the hundreds of MS studies ongoing at any given time, Johnson believes the solution to MS will turn out to be as multifaceted as the disease itself.

"It's probably not one major clue, but a variety of several things," he said.

Given his family history, Johnson is particularly interested in genetic research. He has donated blood to science and asked relatives to do so.

"We were told it was a coincidence my father and his older sister had MS. It just didn't sound right," he said. "We were of a mind to pursue the genetic angle as soon as it hit us and we could no longer abide the fib that it was coincidental."

Johnson says telling his parents about his diagnosis "was like going to your own funeral." Daughters Chloë and Willa, then 10 and 5, took it better. Now in their 20s, the girls are aware of their predisposition to MS but not preoccupied by it, Johnson believes.

"They know that if they sense anything of a symptom, they call me or someone else and get a good recommendation for a doctor as soon as they can," he said.

With decades of volunteering to his credit, Johnson has strong ideas about what motivates people to contribute.

"Many invoke 'giving back' as a principal reason for volunteering, as if duty calls, and the noble must oblige. That leaves me cold. Good work, effort toward a mission that's worthy, is a labor of love in a free world. And while volunteers by definition don't seek or accept money for the work, the psychic income is considerable," he said.

Johnson has been married nearly 35 years to Allison Forkner, a retired federal wildlife biologist. They live on a farmette near Atlanta where they have three horses, a donkey, several chickens and dogs, and, last time he checked, an elderly cat. Forkner is a successful dressage competitor, and while Johnson has lightened his case load, he doesn't think he will ever retire completely from law.

As he looks to the future, Johnson wants to emphasize that the MS movement mustn't be limited by national boundaries.

"The research that leads to some better understanding that starts to get close to a cure may be done in Israel or someplace. It might not happen here," he said.

"That's an important thing for all of us to realize: that we're not alone in this. There are MS societies in most of the other industrialized parts of the world and they too are working hard to fight the effects of MS. We can better help to lead the global movement, and I think that's one thing our present leadership has articulated that we need to pursue."