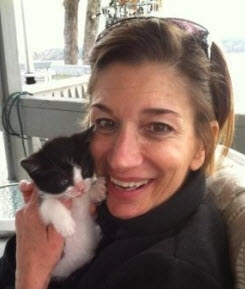 Gina Jennings had been saying she was going to volunteer for a while. For four years, actually. She thought about it, put it off, thought about it some more… until 2008, when she finally took the action to get involved.

With its proximity to her home, and Gina’s passion for cats, the nonprofit SAFE Haven for Cats was an obvious choice. SAFE Haven for Cats is a no-kill cat shelter with a mission to help stray cats through adoption, low cost spaying and neutering, and community outreach.

Upon starting to volunteer, Gina found herself surrounded by people with the same passion: Cats! “Volunteering at an animal shelter means that you’ll be surrounded by those that share at least one thing in common,” says Gina.

She loved the experience, and the feeling that she was doing something worthwhile. She began to look forward to early weekend mornings, when she got to wake up and go to the shelter. She dreamed about leaving her long-time sales career to work for SAFE Haven for Cats full time, but saw the dream as just that – a dream.

However, the stars aligned in 2011 and her dream became a reality when she was asked to start working for SAFE Haven for Cats as paid staff. “I was in the right place at the right time doing the right thing!” says Gina. “Had I not followed through with my desire to volunteer who knows if my dream would have come true.”

Gina currently serves as the organization’s volunteer manager, where she uses VolunteerMatch to let potential volunteers know about SAFE Haven for Cats and how they can help.  “It's an easy way to advertise in a concise way to target the right people,” says Gina.

At SAFE Haven for Cats, volunteers help in every aspect of the organization.  The obvious needs are working directly with the cats to ensure that they have fresh water and clean.  But volunteers also socialize the cats, drive them to veterinarian specialists, adopt them into “furever” homes, and more. “Without our volunteers we would cease to exist,” says Gina. “They are the lifeblood of our organization.”

One volunteer that stands out to Gina is Janet Hensel. Janet has been with SAFE Haven for Cats since 1998, and according to Gina, she does the work of six volunteers. “Even though we have many younger volunteers, nobody can outwork Janet,” says Gina.

For Janet, no job is too big, too small too messy, or too smelly. She has been cleaning every litter box in the shelter for 17 years. Janet also leads the organization’s Pet Food Pantry and Fill A Truck events, loads and unloads thousands of pounds of cat litter, drives to rescue cats from other shelters (no matter what time of night!), fosters cats in her own home, and more. This is all in addition to a full time job.

At one point, Janet was hospitalized and wasn’t expected to live. But by some miracle she recovered, and two weeks out of the hospital was back washing 100 litter boxes. “Janet is a blessing to this world and everyone she meets,” says Gina.

In addition to Janet, Gina works with (and loves working with!) all kinds of exceptional people. “They are the ones that make the difference,” says Gina. “Many of these volunteers are my friends, teachers, and inspiration.  I have tremendous respect for our volunteers.”

“After almost 4 years of working at SAFE Haven for Cats, I am just as passionate as the day I started,” reflects Gina. I'm where I was meant to be. Where are you meant to be?”