The African Library Project changes lives book by book by starting libraries in rural Africa. Their grassroots approach mobilizes U.S. volunteers, young and old, to organize book drives and ship books to a partner library in Africa. Their method makes a concrete and personal difference for children on both continents.

What if you had never had access to books when you were young? (This includes e-books on tablets, too.) How would your life be different now? How would YOU be different?

Africa has the highest percentage of illiteracy in the world, and many African teachers have to teach reading, writing, math and English without even a single book to use as a resource. Meanwhile, U.S. shelves and landfills overflow with discarded books. 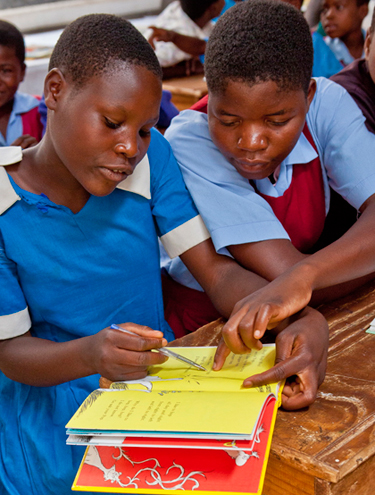 Though the average class size in Malawi is 150 students: 1 teacher, books offer students a chance to learn and grow independently at their own pace.

Enter Chris Bradshaw and her nonprofit organization, African Library Project. Chris is no stranger to doing good. For 10 years she was a YMCA executive, directing camps and conference centers in Indiana, California, and North Carolina. She also worked with nonprofits serving the homeless, children of war-torn countries, a soup kitchen, and home-schooling education and support services.

It wasn't until a family vacation in 2004 visiting remote villages in Lesotho (a small mountainous kingdom in southern Africa), that Chris realized she had the power to do even more good. "When I was noodling around on a horse in Lesotho," Chris remembers, "I learned there was only one library in the entire country." She quickly got to work to fix that. At the time, she was only thinking about helping that one local village.

Two months later, the village had almost finished the building. The project was assigned a Peace Corps volunteer who just happened to be a retired librarian. She and Chris then worked together to establish a total of five libraries in the area.

Chris realized the massive need for books in Africa, and she discovered she had a way to help. The books so many people in the U.S. simply get rid of could be used to educate an entire continent. "It didn't take me long to decide to create something that many people could take part in," Chris relates. In 2005, she founded the African Library Project (ALP), which helps start and improve libraries and distribute children's books in English-speaking African countries.

Since its beginning, ALP has been a grassroots organization. It has always depended on the generosity and leadership of volunteers across the country. In fact, the organization itself is completely volunteer-run – the board meets around Chris's dining room table.

So how does ALP work its magic? The organization engages volunteers to run book drives in local communities. Each book drive raises 1,000 books and $500 to cover shipping costs. These supplies are then matched with a library project being run by one of ALP's partners in Africa. 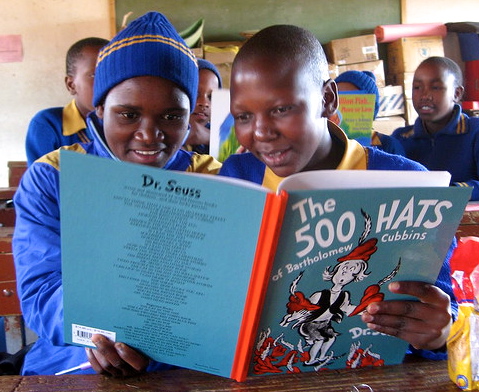 Each book drive is matched with a specific library project in Africa, like this one in Lesotho.

To date, African Library Project has shipped 1.3 million books to start or improve 1,228 libraries in rural communities in 10 different African countries. And one of the most fulfilling aspects of the work, relates Chris, is getting to work with so many hardworking, compassionate people from both North America and Africa. "We knew what we were doing would be transformative for Africans," Chris says, "But it turns out it's also life-changing for the volunteers who run the book drives."

A woman in New Jersey recently called Chris. Her young daughter is doing a book drive, and she described to Chris how her daughter has gone from being a shy observer to a confident leader with a purpose. Now this mother wants to volunteer further with the organization to help transform the lives of other kids like her daughter. 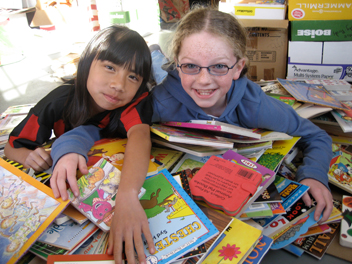 Another story gives a glimpse of the magic created when ALP matches a volunteer book drive organizer with an African village, this time in Botswana: Back in 2007, three generations of the McDermott family of Palo Alto, Calif., decided to collect books and raise money to help establish a library through ALP in lieu of their holiday gift exchange. The family threw themselves into collecting books, and after a couple of months they had collected over 4,000 books and enough money to start three libraries - two in Lesotho and one in New Xade, Botswana.

Now, fast forward to today - and meet an orphan from Botswana, who, powered by his own ingenuity and aided by books from ALP, is poised to attend a science or engineering program at a university anywhere in the world on full scholarship. Ketelelo Moapare received his first access to books in 2007 when he was 12, in his village of New Xade, Botswana. 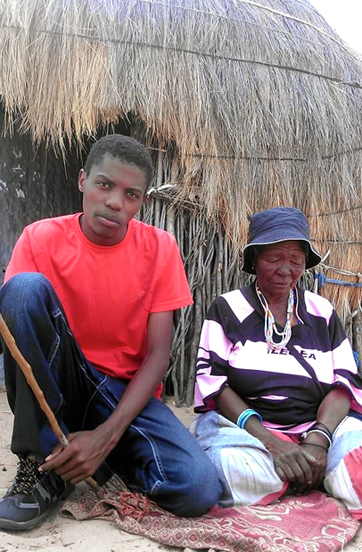 San Bushman Ketelelo Moapare with his grandmother outside his home in Botswana.

Ketelelo looks back and says "...the library instilled the culture of reading into me through the establishment of the Yiaquisii library with the help of the African Library Project." The establishment of a community library was a huge turning point in Ketelelo's life: for the first time, he was able to satiate his hunger for learning with access to a wealth of knowledge in the form of donated books from America. Ketelelo was the library's first patron and spent all of his high school vacations and holidays with his nose in books. Now, Ketelelo, the first San Bushman to ever graduate from high school is serving as an example for his entire village.

Chris and ALP use VolunteerMatch primarily as a source for new book drive organizers. They've also used the network to find new board members, interns and coordinators. As a volunteer-run organization, the website is a valuable resource.

ALP is currently recruiting volunteers for book drives to stock libraries in Malawi and Sierra Leone. They still need about 50 drives in order to fill their spring containers. Plus, if they get even more volunteers to run drives during the summer, they could help a new partner in South Africa, and bring libraries, books, learning and inspiration to an entirely new country.

Chris's long-term goal is to provide access to information throughout Africa's 22 Anglophone countries. They are currently actively working in six, so there is still a long way to go. Chris says she'd also love to eventually partner with NGOs in Francophone countries, to work in French-speaking countries in Africa, too.

For now, though, Chris is focused on engaging more volunteers to run book drives. The beauty of ALP's model, Chris points out, is that anyone can do it, and anyone can help make a huge difference for so many people in Africa. "Schools, churches, companies, youth groups, seniors, small children, families…anyone can participate!" she says. "Just go to the website and click 'Start a Book Drive.'"