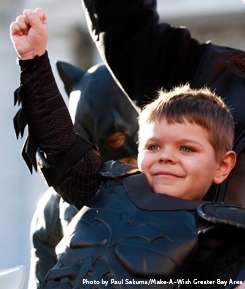 Make-A-Wish is a charitable nonprofit organization whose purpose is to fulfill magical wishes for children with life-threatening illnesses. Proceeds from the Make-A-Wish fundraising efforts are used to fulfill children's dreams and create special memories for the entire family.

Check out Make-A-Wish opportunities at VolunteerMatch.

The team at Make-A-Wish Greater Bay Area first heard about Miles Scott's wish to be Batkid in early 2013. "We were like 'Here's a really cool wish,'" recalls Daniel Marlay, Volunteer Manager of the Make-A-Wish chapter.

Granting Miles' wish involved turning San Francisco into Gotham City. No big deal. The real challenge was going to be coming up with a crowd of volunteers to attend the final celebration at City Hall. Past events for other children's wishes had managed to bring out 200-300 people, and after Daniel and his team put out the call for volunteers for this event, this was the size they were anticipating for Miles.

Then, through the power of social media and the Internet, the wish went viral.

"After that," Daniel relates, "Everything happened for us." By the time the big day rolled around, over 16,000 people had RSVP'd to be the adoring crowd for Miles. Additionally, offers for non-traditional volunteering and donating were popping up everywhere. They got 13 offers of Batmobiles. People were offering toys, paintings, nightlights. They had emails pouring in asking, "I see this event is full – can't I go anyway?"

While all of this attention was a good thing, it did present a new set of challenges: actually managing the tens of thousands of people who wanted to take part in Miles' special day. Daniel and his team got a crash course in crowd control, and when over 20,000 people showed up for the final celebration at City Hall, they were able to ensure the focus stayed on giving Miles a magical day as a famous superhero.

In addition to its wild popularity, this wish was also unique in the diverse types of volunteers who got involved. Of course there were tens of thousands of people who volunteered to be Batkid's adoring fans – people Daniel and Make-A-Wish never directly contacted and will never know about.

The adult Batman who accompanied Miles throughout the day, as well as the villains against whom he fought, were all volunteer actors. The police, the mayor, Twitter and other local businesses all participated as volunteers. And the lines were also blurred between volunteers and donors, as many "volunteered" stuff, including the many Batmobiles noted above.

There's no question that Miles will remember his day as Batkid forever. The event also is likely to have a long-term impact for Make-A-Wish Greater Bay Area, too. Their social media engagement shot through the roof. For example, they grew from 3,000 followers on Twitter to 24,000 in just a few weeks. Over 16,000 #SFBatkid photos were posted to Instagram.

At the peak of the buzz, there were 1,400 hits to the organization's website per second. Almost 500 people formally applied for longer-term volunteer opportunities as a result of hearing about Batkid and his wish.

While all of this added visibility is a good thing, Daniel points out that it does present new difficulties. "From the perspective of a volunteer manager," he says, "It's great to increase visibility, but then we have to figure out what to do with it." He and the Make-A-Wish team still have to go through the process of interviewing, screening, doing background checks, and getting real commitments from all of these interested volunteers. And the entire staff is only 23 people strong. "Still," Daniel reflects, "It's great to have the visibility to entice them."

Daniel plans to leverage the greater awareness and connections in the community created by Batkid to help grant other wishes – that's what it's all about, after all. Make-A-Wish Greater Bay Area hopes to grant 357 wishes during its current fiscal year, and there is always a need for volunteer help.

In fact, their biggest needs are Spanish speakers who can communicate with many families of sick children who don't speak English, and people from other areas like Fremont, Brentwood, and Humboldt. The immediate San Francisco region is pretty well set when it comes to volunteers.

Batkid captured the Riddler mid-robbery in the basement of VolunteerMatch headquarters!

Overall, it was a fantastic experience to be a part of, Daniel says. Their goal now is to provide a special experience like this for all of their grantees. Even before Batkid, they were planning ways to "take things up a notch" with their wish-granting. It seems like they are well on their way!

And as they succeed, they are making a difference not just for children like Miles, not just for their families, but also for the thousands of volunteers who are eager to be a part of something so special. That is the true long-term impact of Batkid and his day saving Gotham City.