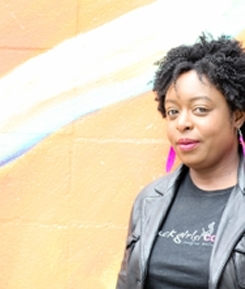 Black Girls CODE is a nonprofit organization dedicated to teaching girls ages 7-16 from underrepresented communities about computer programming and digital technology. The organization hosts workshops and after-school programs taught by trained professionals on a wide range of topics such as computer programming, robotics and logical and thinking games.

Kimberly Bryant is one of only a handful of black women in the fields of science, technology, engineering and mathematics (STEM). In response to this, she decided to make it her life's mission to solve this lack of diversity.

During college, she felt somewhat culturally isolated. Although she enjoyed her math and science courses, Kimberly couldn't help noticing that she was very different from most of her classmates. "There's much to be said for making any challenging journey with people of the same cultural background," she explains.

Many years later, Kimberly once again noticed the same lack of diversity in the technology field for minorities and women -- this time while she was developing a mobile health tech startup. "I attended literally hundreds of networking events in the Bay Area yet saw very few folks that looked like me in attendance," says Kimberly.

Kimberly's daughter, who is currently in middle school, has been interested in technology and an avid gamer since the age of 8. Several years ago, after realizing her daughter would frequently get bored with videogames, Kimberly wanted to show her how to make one and enrolled her in a summer game development program at Stanford. "It was a great experience for her," explains Kimberly. "But there were only about 3 girls out of approximately 25 students and she was the only person of color enrolled."

As a result of these experiences, Kimberly decided to launch Black Girls CODE, a nonprofit that encourages young minority women to pursue a career in technology by providing them with workshops and after-school programs focused on a wide range of tech-related topics. "Our goal," Kimberly explains, "is to address the gender and diversity gap in technology and to feed girls into the STEM pipeline as early in their development years as possible."

Black Girls CODE started with a single 6-week program in 2011 and now conducts workshops around the country and even internationally in South Africa. Students have the opportunity to build their own video games and web pages, program robots and learn computer languages such as Alice, SCRATCH, Kodu and Ruby.

Software engineers and professionals teach the workshops and mentor the students. Volunteers at the organization come from such diverse fields as accounting, banking, education. These volunteers help with program operations, fundraising, event planning and community outreach. "We welcome volunteers from all areas and walks of life who are interested in helping drive the mission of introducing young women to STEM careers," says Kimberly.

The organization offers a sense of community for the girls who attend and Kimberly is able to see the positive effects of her work firsthand. She recalls, "One student from a recent workshop told her mother that she finally felt like she belonged after attending one of our workshops." Ultimately, this is the reason Kimberly and the volunteers give their time for this important work.

Kimberly is doing her best to dispel the view of computer programmers as being isolated and antisocial. "That [view] doesn't resonate with most girls, especially elementary and middle school girls," she explains. "We do a lot of group work and pairs programming projects because they need that connection and collaboration. So that helps break down the stereotypes of always being alone."

Kimberly has found a great way to encourage those in the tech fields to give back and inspire young minority women. As Kimberly says, "Black Girls CODE allows myself and others countless opportunities to give back to our communities and mentor the next generation of STEM professionals."