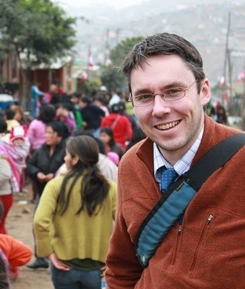 MEDLIFE is a nonprofit organization that works to free communities from the constraints of poverty by focusing on three areas: medicine, education and community development. They serve over 60 communities in Peru and Ecuador and have student-based chapters at over 50 universities across the United States, Canada and Puerto Rico.

Dr. Nicolas Ellis, founder and CEO of MEDLIFE, has found a creative way to help solve the health care disparity in developing countries, by educating students about issues in global health and empowering them to work with teams directly within the world's most impoverished communities.

Nick started MEDLIFE as a student group in 2005 during his undergraduate studies at the University of Maine. On his own initiative, he began working with doctors in Ecuador to deliver medical services to rural villages in the Andes mountain range.

During his experiences in Latin America, Nick was exposed to many facets of poverty, however, the lack of access to healthcare was the most shocking. "I remember seeing a homeless man in a bus station in Panama who had an open wound on his leg. Day after day he sat there and never received any kind of help. For me, if I have the ability to help someone who is suffering, then that is an obvious "good" that I can do," says Nick.

"Poverty and sickness is a cruel combination and my experiences in Latin America inspired me to study medicine, explains Nick. "Medicine is a concrete tool that I can use to help people who are suffering."

After returning to the University of Maine, he gathered a group of committed students and raised money for the patients he had worked with in Ecuador. His enthusiasm for helping the poor of Latin America soon spread to students at other schools, and thus the first MEDLIFE student chapters were created.

Nick recalls an inspiring story about a MEDLIFE volunteer: "I remember one of the early volunteers who was truly committed to the organization met a child that needed a major surgery. Before he went home he asked me how he could help the child, and I told him we needed to raise funds. He went home and stood out in the middle of winter in New England and asked people for spare change."

"It was far from a glorious job," Nick relates. "In reality it was a tough job to ask people for spare pocket change in the middle of winter, but he never gave up. Eventually he made enough money to get the child surgery. For me it was inspiring because it proved to me that we don't have to be geniuses or rich beyond belief to help - all we need is to care and be committed. His commitment has inspired me for years."

Currently, MEDLIFE's grassroots network of student-based chapters across 50 universities represent and promote the organization at their schools and in their local communities. Through the organization, students have the opportunity to volunteer with MEDLIFE's Mobile Clinics in Ecuador and Peru, which bring local medical professionals, including general physicians, dentists, OB/GYNs, and nurses, directly to areas with little to no access to basic health care services.

MEDLIFE has a full time staff on the ground in Ecuador and Peru. "We know how to utilize the modest resources we have in poor communities by listening to the poor," explains Nick. "The organization was born out of the poor shanty towns and rural marginalized communities of Latin America."

Additionally, The MEDLIFE Project Fundworks with community leaders and local authorities to develop specific, sustainable solutions for each community. To date, MEDLIFE has attended over 40,000 patients and built 70 sustainable community development projects.

In the past, Nick worked with many nonprofits that had adequate financial resources but didn't know how to bring those resources to bear in the poorest communities. He explains, "The reason this happens is that many nonprofits are created out of the kindness and wealth in developed countries." MEDLIFE strives to develop a close relationship with the communities they serve.

Although his position within the organization is CEO, Nick explains that his job in reality is to help coordinate between student chapters and underprivileged communities around the world. "In general, it's my job to make sure that we can take the energy and motivation of a student in Boston to help people living in poverty elsewhere in the world - and to make sure we can provide real, practical solutions for families in the areas where we work."

As Nick says, the challenges that the organization faces now are completely different from the ones that they faced in their first years. "Now we worry more about administrative matters, but in the end all of the challenges we face push us toward our goal of helping poor families to live healthier, more fulfilled lives."