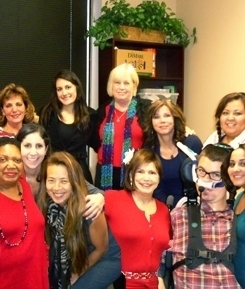 Family Assessment Counseling & Education Services, better known as F.A.C.E.S., provides professional counseling, education and other services for children and their families caught in the crossfire of divorce and provides education to prevent family violence.

Check out F.A.C.E.S. opportunities on VolunteerMatch.

The first volunteer for the nonprofit organization F.A.C.E.S. (Family Assessment,Counseling & Education Services) was Richard Ronsko, who painted the organization's first logo in front of the little house that served as the headquarters.

Not long after that, John Smith III, an attorney in family law, gave his services pro bono to get the program incorporated as an official nonprofit. When Gerry Klein agreed to be the first Board President, he brought with him a group of volunteers who gave their enthusiasm, time and effort to develop outreach ideas for the fledgling nonprofit.

So you see, F.A.C.E.S. would never have existed had it not been for the dedication of volunteers – and the determination of its founder, Mary O'Connor.

Mary was a single parent of five, a court mediator, and a private practice psychotherapist with a busy counseling practice in Orange County, Calif. when she first had the idea for F.A.C.E.S. She was concerned about the families who needed help but could not afford counseling.

She would conduct home assessments and see first-hand how little families had after the trauma of a divorce. Some had no refrigerators; others had no bed for their children when they came to visit. If someone could barely afford a bus ride, how could they pay for counseling? What resources were available to help them?

With fellow founders Shelley Driscoll and Cheryl Ramirez, Mary went to funders and community health centers to spread the word. They partnered with a couple of local universities to bring in trainee counseling students to work at the agency. Mary's vision was to structure the agency like Chapman University's clinic where she had received her training, while adding in the educational component of working with family law courts, social services and attorneys specializing in the needs of single parent families.

Fast forward to today, F.A.C.E.S. is organized around three offices from the north to south end of Orange County, with two satellite locations in partnership with a community agency and the local Boys and Girls Club. 25 therapists and 20 monitors, support staff and administrators work together on all aspects of the organization.

"They all pitch in for our fundraisers," says Mary of her staff, "And brainstorm how we can continue this wonderful journey of providing F.A.C.E.S. services." In 2012 alone, 3600 parents and children received services from F.A.C.E.S. volunteer staff.

In addition to its face-to-face programs, the agency has also created a publishing arm, producing its own ABCs of Anger Management book, as well as Mary's book "Parenting Solo: A Guidebook for Busy Single Parents," which is used in the F.A.C.E.S. co-parenting classes.

"Our wonderful volunteers notice the need for their help as soon as they enter our doors," says Mary. Everyone at F.A.C.E.S. is a volunteer who has committed to a certain period of time with the agency. Volunteers work with families who are hurt, angry and broken from their relationships. The volunteers are trained from the beginning to be neutral advocates for the safety of the children – which is the first priority of the organization.

Mary says that VolunteerMatch has been a huge factor in the growth and success of F.A.C.E.S. "Without the outreach of VolunteerMatch and its awesome volunteers, we would not be the organization that we are today," she says. "VolunteerMatch friends have served on our board of directors, have spent two years as accountant to our books, have created fundraisers for F.A.C.E.S., websites, illustrations, editing for books and literature, newsletters, filing, phone answering, monitoring visits and counseling."

When Mary began work at the helm of F.A.C.E.S. she still had children at home and was juggling family and work with fundraising and networking for the organization. Today, with her kids grown and 15 grandchildren who have already donated time to F.A.C.E.S., she sees a bright future for families. The lights on and the doors are open for more families in need, and Mary and F.A.C.E.S. will always welcome more volunteers with open arms to help out.