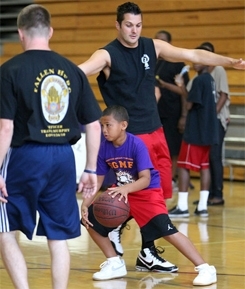 The mission of DGMF is to provide the means to make possible, practical, and easy the opportunity for youth of today to reach for the highest level of achievement in their lives.

Check out DGMF opportunities at VolunteerMatch.

What would you do if faced with one of the most difficult tragedies life could throw at you? For Cynthia Gosa-Lazaro, the answer was to look outwards, and view her personal tragedy as an opportunity to help others.

"My real story began in April of 2004," says Cynthia. She and her husband partnered with a friend to co-found First Watch Ministries, serving the homeless population in their local neighborhood. Eight years later, they are still providing words of encouragement, resources and support for homeless people in the Phoenix, Ariz. area.

Then, in 2007, Cynthia established House of H.E.L.P.S. (HOH), which is an acronym for Helping, Encouraging, & Leading People through Support. Originally HOH was a home for women who needed a refuge; those who had been battered, beaten, and thrown away by society. "Many women were restored through HOH," says Cynthia, "and I am very grateful for all of them who received their children back and went on to live prosperous lives."

Today, HOH serves as the First Watch Ministries' sanctuary, their community outreach facility, and a home for the elderly, disabled, and homeless. They have a food box distribution two to three times per month, block parties free for all to attend, & Saturday morning worship services for those who would like to join in.

In June of 2009, Cynthia and her family were struck a horrible blow: During a break-in at his home, her eldest son was killed. "They stole my son's life," Cynthia says. "They killed my faith, enthusiasm and peace." Yet eventually, from her grief and anger, she found a new calling.

One day Cynthia was at court reliving the horrible circumstances of that night, and she found herself thinking about her son's killer. "I actually wondered what if?" she recalls. "What if this man had had a different upbringing? What if he had been raised with good morals, character, values and integrity?"

Cynthia strongly felt that if the killer's childhood had been different, her son would still be alive. Therefore, she decided to turn her focus to at-risk youth. "I thought, well if God chose this path for me who am I not to accept the calling?" she relates. So in March 2010, 3 months shy of the anniversary of her son's death, Cynthia launched the Damion Gosa Memorial Foundation (DGMF).

DGMF seeks to steer youth from violence by changing a generation. They have various programs to provide at-risk youth positive influences, such as an annual basketball tournament in Damion's memory, with speakers from the community and additional entertainment.

Their youth program is called E.M.P.L.O.Y., which stands for "Empowering & Motivating Positive Leadership Opportunities for Youth." They have an after school program, consisting of music and choir singing, computer and financial literacy, mental health, nutrition, physical education, Spanish lessons, dance, drama and more. They run a summer youth program, and at least one event per month when they take the youth to concerts, museums, amusement parks and the movies.

Considering the breadth of programming DGMF provides for an entire community of young people, it's amazing that the organization is completely volunteer-run. In fact, recruiting enough volunteer help is the major obstacle Cynthia faces to realize her vision of changing a generation.

"This is not an easy job," she says. "We are seeking to change the youth of today. These are at-risk youth, so it takes a lot of patience."

Fueled by her son's beloved memory and her determination to make a difference, Cynthia enlists the passions of people she meets in the community to help DGMF programs achieve success. Tools like VolunteerMatch provide a way to reach out beyond her own community – after all, roles like grant writer and online fundraiser can be filled by anyone, anywhere.

Cynthia and her work with DGMF is an example of how one woman's idea and drive can bring people together – and how dedicated volunteers can strengthen an entire community.