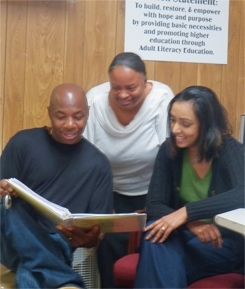 The MM Hope House mission is to build, restore and empower individuals and families with hope and purpose by providing basic necessities for life and promoting higher education to become self-sufficient.

When Marlene Lemons was 16, she got pregnant and dropped out of school. You might think you know how the rest of this story goes, but you'd be wrong. Marlene didn't just pull herself up and build a better life for herself and her family; she founded MM Hope House so she could help thousands of others do the same.

After Marlene left school she got married, and remains married to this day. She now has two sons and nine grandchildren. She eventually went back to school and earned her GED certificate in 1979.

Then Marlene went on to receive college degrees in Biblical Theology, Leadership Administration, and soon Public Administration. She has written two books, has been a licensed evangelist for 20 years, and is, in her words, "a very proud mother, wife and grandmother."

After her own journey, Marlene wanted to make a difference in the lives of others, so in 2005 she began working with volunteers to help the homeless. She got a group together to feed and provide clothing and toiletries to homeless people once a month through a church in Atlanta, Georgia. "It felt so good being able to supply a need," Marlene relates. "So we decided to extend it to twice a month."

After a couple of years Marlene and her staff realized they could and should do more. They went through the necessary steps to become a certified Adult Literacy site, and they each got certified as GED teachers, as well.

This was how Marlene wanted to help others help themselves. "I had an urgency," she says. "To promote higher education, to give these people a greater chance at a brighter future."

And close to a decade later, she continues to do so. In 2011 alone, MM Hope House served over 741 participants, providing food, clothing, toiletries, referrals, toys for tots, GED Prep, life skills, job readiness and more. They were able to further enhance their services through partnerships with organizations like United Way 211, Georgia Piedmont College of Adult Literacy, Stepping Stones Academy and The Red Hatters of The Lou Walker Center.

Marlene shares her favorite memories of serving others through MM Hope House. "One lady returned immediately after receiving the clothing to let us know how happy she was about them," she recalls. The lady had gone somewhere to take a bath, and had come back smiling and happy, telling the staff that she had on everything they had given her, including the perfume. Marlene realized that even this small gift of love gave this lady a sense of being cared for, something to feel good about.

On another occasion, a man and his wife came to the MM Hope House office with their five children. Neither of the parents was working, and the kids had no shoes and clothing that was too small. The couple went through the MM Hope House clothing closet with great joy, as if they were shopping at Macy's. The children were trying on shoe after shoe, their faces lit up and laughing as if they were in a toy store.

And then there's George. George got assigned 24 hours of community service for a speeding ticket violation. He began volunteering with MM Hope House on May 22, 2012, and when he ended his required service on May 31, 2012, he asked to stay on as one of their instructors. His day job consists of using his medical expertise to teach doctors and patients how to operate diabetic machines, and he immediately latched on to Marlene's vision for MM Hope House and became a well-valued member of the team. In June 2012 he became the Vice Chairman of the organization.

Although not all volunteers have been as exceptional as George, Marlene says that VolunteerMatch has been a consistent resource for her. The volunteers with whom she has connected using the website have been dedicated, determined and dependable.

Marlene talks about how VolunteerMatch has significantly helped MM Hope House by referring people not only with professional skills, but with integrity and a passion to make a difference in the lives of others.

Marlene will never forget what first inspired her to dedicate her life to others. "I wanted to let them know that just because you make a mistake, you do not have to keep repeating it," she says. "You can get up, learn from your mistake and go on to make the best out of life, impacting other lives and making a difference through the things you suffered."