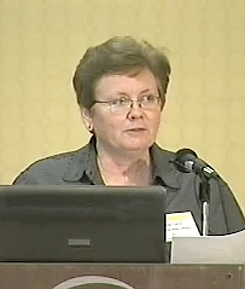 The California State Library is the state's information hub, preserving California's cultural heritage and connecting people, libraries and government to the resources and tools they need to succeed and to build a strong California.

Carla Lehn is not your average librarian. Oh sure, she kind of looks like everyone's favorite Aunt, and she's certainly quick to smile and give you a greeting that leaves you no doubt that her day is now brighter and more interesting with you in it.

But with more than 20 years working in the California State Library system under her belt, and as manager of probably the most successful library volunteer program in the country, Carla is more like The Incredible Hulk of librarians.

It all started for her as a child, watching her parents volunteer -- with her school, her Girl Scout troop, the local YMCA, etc. The example they set for her led her to serve as an Americorps VISTA volunteer after college, and, as she says, "My interest in service stuck!"

For about ten years (during which time she had a child and lived in Hawaii), she was an external consultant for the state library in California. She consulted and trained on volunteer engagement, board development and community development topics.

In 2001 she joined the staff of the library full time. As the library programs consultant, she currently works with the statewide adult library literacy program, which serves over 22,000 adults per year and involves more than 12,000 volunteers in 900 locations around the state. As a result of this program, some of California's 3.4 million illiterate adults are voting for the first time, reading newspapers, reading to their kids and getting jobs.

Carla also oversees California State Library's program with VolunteerMatch, called "Get Involved: Powered by Your Library." This is a statewide volunteerism initiative with three major components: Training library staff to move beyond traditional library roles and engage skilled volunteers; the statewide VolunteerMatch "hub" and widget on library websites, which helps the libraries reach people they wouldn't have found otherwise; and a new focus on sustainability of the project, with a resource-filled website and regional peer networks being developed around the state.

The Get Involved: Powered by Your Library program began in 2008. At that time the state library was running an initiative to better serve and involve Baby Boomers. After trainings and local needs assessments, more than half of the libraries in the state asked for funding for volunteer programs -- this is what the Boomers were asking for! Thus the program was born, and the partnership with VolunteerMatch was formed to help the libraries dramatically increase their reach and engagement of volunteers.

"Initially, some libraries were concerned about union issues, as well as possible staff resistance to engaging volunteers," says Carla. Their solution for this was simple and effective - they did surveys, interviewed folks, and created resource materials. Currently they are working on a newly updated resource website, which will include "Hot Topics" pages and video clips on both of these issues, highlighting materials and suggestions for overcoming them.

The initial resistance quickly faded, and libraries across California have adopted the new system. "We now have over 800 volunteer opportunities posted on VolunteerMatch by California public libraries, and are getting 500-600 volunteer connections per month!" Carla reports enthusiastically.

It's not just the volume of engagement by the libraries that is notable, but the diversity, as well. They are recruiting tutors, professional event planners, graphic designers, computer coaches, homework helpers, Lego Club leaders and more. Says Carla, "Our partnership with VolunteerMatch has allowed us to help public libraries in California think outside the box in terms of who their volunteers might be and what they might do to enhance or expand the library's important work in the community."

Many of the volunteers connecting with the library through the VolunteerMatch hub are people who haven't even set foot in a library in a long time. Carla says when they do come in they are amazed and excited to see how libraries have evolved with the times.

Carla herself is astonished at the breadth of volunteer roles they've engaged since beginning the program. "We have a bunch of ‘Book Inspectors,' and a volunteer newsletter editor for our Braille and Talking Book Library," she says. "Our newest volunteer position is Japanese American History Archivist -- helping to organize materials about the Internment during WWII, so we can make them accessible to the public."

"I don't have to think of every new idea!" Carla marvels. "The volunteers come with worlds of experience and skill that helps to widen program horizons, help us look at new ways to do things…and besides that, they often become some of our strongest supporters."

Carla relates the story of how one volunteer in particular helped her. "I had been trying for almost three years to gain enough understanding of Facebook to launch a page for our statewide literacy program, with the goal of volunteer recruitment." After three years, Carla decided to engage a volunteer. "Within three weeks of finding a volunteer ‘Web Wrangler' on VolunteerMatch, our page was up!" she says. "Miguel has been with us for over a year now, and he consistently amazes me, going above and beyond. He's developed special tabs and infographics for the page, as well as helped us to understand the new Timeline, Facebook Ads and Sponsored Stories."

"Watching the library folks grab on to the concept of volunteer engagement, rather than volunteer management, has been very rewarding for me," says Carla. With her background in volunteerism and nonprofit management, the Get Involved project has been a perfect fit for her.

"I also credit my need to learn how to use the branded VolunteerMatch hub site with helping me be less afraid of other such platforms," she muses. For example, she just created a Pinterest board about library volunteers.

With Carla's newfound fearlessness, and a legion of engaged volunteers, it seems like the sky's the limit for California State Libraries.