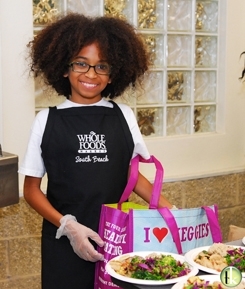 Joshua's Heart Foundation empowers needy people to improve their quality of life by providing items of basic necessity such as food and other grocery products and by effectively engaging and educating communities at home and abroad about committing to fight hunger and poverty on a global basis.

Since Joshua's Heart Foundation was established in 2005, it has served the hungry in Florida through a variety of hunger relief programs. It has fed 8,000 individuals and distributed 380,000 pounds of food in South Florida and Jamaica.

Joshua Williams founded Joshua's Heart Foundation when he was five. He recalls the moment he wanted to serve others, when his grandmother had given him twenty dollars one day. "On the way [to church] I saw a homeless man," he says. "I felt really bad for him so I gave him the twenty dollars."

Later on, Joshua was watching television when he saw a commercial asking for donations to help children in developing countries. "I felt sorry for them and I wanted to adopt them all," he says. "So I thought about how I could help."

Joshua started out by donating food to needy families in his grandmother's church with his mother, Claudia McLean. He soon got the idea of starting his own nonprofit.

Florida is one of the poorest states in the nation, where 924,000 children currently live in poverty and 1.4 million students receive free or subsidized lunch. It's no wonder that Joshua ultimately decided to focus on hunger.

"It's so sad to see these families who are working and trying their best but they're not making it," he says.

Besides distributing food to families several times a year, Joshua's Heart also has a Back Pack Program, which discreetly distributes food to students who receive free or reduced price lunch when those resources are not available, such as vacations and weekends.

Whole Foods Market South Beach, a community partner of Joshua's Heart Foundation, also hosts a program that teaches families how to prepare healthy meals. Joshua's Heart partners with local restaurants, schools and other nonprofits, such as Stop Hunger, another agency that assists with hunger by donating food supplies.

Joshua's Heart purchases other food from grocery stores or at a discount from other food banks. Local businesses get involved, as well. Mimi's Ravioli, a restaurant in Florida, donates pasta and bread, National Pasteurized Eggs donates eggs several times a year towards the distributions, and First Care Home Services provides office space, supplies and some staff support for Joshua's Heart to work.

Recently, Joshua's Heart received a grant from Walmart to fund one of its Back Pack Programs. The Foundation has also garnered nationwide media attentionon channels such as NBC Nightly News with Brian Williams and Nick News on the children's television network Nickelodeon.

Despite running his own nonprofit, Joshua still manages to do regular kid things, like school. "I do my homework and after school activities first, then Joshua's Heart work," he says. "I get to be a kid on the weekends, but I still do Joshua's Heart, too."

Joshua's mother, Claudia McLean, is instrumental in keeping Joshua's Heart running. Before the Foundation was established she was reluctant to help Joshua start his the organization because of all the work they would have to do. However, Joshua was persistent, and she finally gave in.

"‘This is my passion, Mom. It's something I need to do,' he said. How can I say no to that?" Claudia relates.

Claudia now takes care of logistics like email and scheduling, while Joshua comes up with the big ideas, gives speeches and attends meetings to promote Joshua's Heart.

Helping Joshua run his foundation can be overwhelming, but in the end, Claudia thinks it's worth it. "You get discouraged at times, trying to find vendors, food, sponsors or volunteers," she says. "But once you give the grocery bags to the families, you forget all of that and you want to do more."

Volunteers also play a critical role in running Joshua's Heart Foundation. "They help me with paperwork, plan fundraisers and events, and assist with picking up and distributing food," he says.

It's important to Joshua that young people are able to be involved with Joshua's Heart. There is only one requirement for volunteers: They must be at least eighteen months old (so they can move on their own.) Joshua's Heart also has a junior advisory board, made up of members who are under 17.

In the end, Joshua believes that helping others is his passion, and that everyone, no matter what age, can make a difference.

"No matter how tired I am, I need to keep trying," he says. "No one should be hungry."