Millions of Americans are now eligible for student loan relief 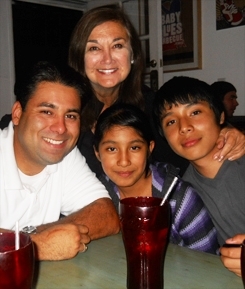 The Children's Lifesaving Foundation is a nonprofit dedicated to positively transforming the lives of LA's at-risk, very low-income and homeless youth & families.

Check out the Children's Lifesaving Foundation opportunities at VolunteerMatch.

Maria D'Angelo, founder and CEO, of the Children's Lifesaving Foundation (CLF), recalls how her organization began almost by accident.

"I never meant to start a foundation," she says. "It just organically began to happen."

Maria began as a volunteer, serving at a homeless shelter in Los Angeles. She discovered that many of the children she worked with not only lived in poverty, but also hadn't gone to school because they could not afford to get the required physicals or vaccinations. With the help of medical professionals who volunteered their time, Maria began to offer medical services to low-income families in the area. Thus began the CLF.

Then Maria realized that the children she worked with were not only behind academically, but many of them had never even left their inner-city environment. She remembers one particular time when she was talking to a little boy who had given her a brochure on Disneyland, asking her if she could read it for him. When Maria asked why he couldn't read it to her, he told her that he hadn't learned to read. She decided to find a safe space where children could leave their harsh urban environment and spend time outdoors, experiencing things that children ought to experience.

Through one of the doctors she worked with, she found out about an old boy scout camp in the Malibu Mountains, and with the help of 150 volunteers and all donated materials, she renovated it and established one of the first major programs under the CLF, a camp called Camp4All.

"If something is meant to happen," Maria says, "Forces just come together and everything works out."

Camp4All opened on July 7, 1993 and began with 7 campers. Soon enough, the camp was accepting 75 kids a day. Now, almost 20 years after its inception, 50,000 children have attended Camp4All free of charge, providing campers with surf lessons and other outdoor activities otherwise not available to them in an inner-city environment.

Since Camp4All's foundation in 1993, the CLF has increased its size and scope, including other programs that provide financial and medical support as well as enrichment programs for youth. Along with Camp4All, the CLF runs Care Through College, which assists youth with tutoring and helps them get into college. This is a critical resource, as youth living in poverty are 10 times more likely to drop out of high school than youth living above the poverty line. And the youth in the Care Through College program aren't just graduating from high school -- they are excelling in their studies and entering college.

The CLF also runs Adopt-A-Family, a program that provides financial assistance to families in homeless shelters and helps them find stable housing. Since 1993, 42 families have found new homes through Adopt-A-Family.

All services offered by the CLF to families and children are free of charge. Surrounding organizations have helped the Foundation, donating resources such as space, grants, scholarships and school materials. The Community Service Commission of Point Dume Marine Science Elementary School of Malibu, Calif. donated $6,000 last year alone.

The CLF prides itself on not only serving the community, but also participating in the community itself. Staff members regularly attend birthday celebrations and other social gatherings with current and former clients.

"We are unique in that they're not just our clients" says Francesca McCaffery, Maria's daughter and the CLF’s Director of Development. "They become part of the big extended family of volunteers and our organization."

Due to the organization's small staff, volunteers play an integral part in running its programs. Over 350 volunteers serve the CLF annually as tutors, camp counselors, chaperones and fundraisers. Most of the volunteers are young professionals in their mid or late 20s, as well as retirees and high school students.

Several teens who benefited from the CLF in the past have given back to the organization, serving as chaperones during field trips with younger children. "[Our volunteers] get a lot out of it right away, and they keep coming back, often for years, becoming a part of our foundation family and network," says Francesca.

Lorie Metz, for example, has volunteered at the CLF for the past six years. "I particularly love our summer program," says Lorie. "We provide hundreds of inner city children with surf lessons. It's amazing to spend the day with these children, some of who have never been to the beach! It's amazing to have them out in nature experiencing something new."

When asked why volunteers keep coming back, Maria replies, "It's a wonderful work environment. It's a fun environment, but also a serious environment."

The CLF has been running strong for almost 20 years, with Maria still at its helm. And she still loves it. "I still love the newness of meeting new people, and of changing the lives of children, and hopefully, their families."

How can other nonprofits thrive like the CLF has? "Do what you love," Maria shares. “Don't be afraid to share your resources with others. Collaborate as much as you can."

But more than anything else, the most valuable resource is always your volunteer set. "Volunteers are your lifeblood," says Maria. "Honor them above everything."