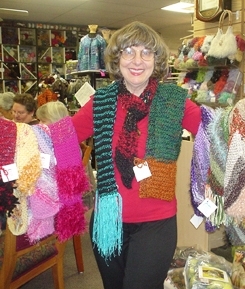 Handmade Especially for You
Organization profile

Handmade Especially for You knits/crochets comfort scarves and donates them to abused women who have sought safety from their abusive environment. Their scarves tell these women that they care about them, they think they are valuable, and they think they have a happy future ahead.

Check out Handmade Especially for You opportunities on VolunteerMatch.

After Leslye Borden decided to sell her business in 2007, she spent a lot of her free time on her favorite hobby: knitting. She made many beautiful garments for her granddaughters, until one day she found some of those very items in her daughter's giveaway box.

She was shocked. But when she really thought about it, she realized she was making too many things for girls who already had plenty. She decided to find people who really needed what she was making. That determination led her to create Handmade Especially for You.

For a while, Leslye just used her own time and skills to make garments for those in need. She knit socks for an organization called Warm Woolies, which provides knit and crocheted garments for children in extreme poverty. She knit some preemie hats for Stitches from the Heart. But even creating these much needed items didn't satisfy her. She wanted to find more recipients who would treasure what she made.

Leslye searched and searched, and finally discovered that there were no groups out there making items for abused women. She made 30 beautiful knit scarves, found Rainbow Services in San Pedro in her area, and donated all of the scarves.

The director of the shelter was thrilled. She said each scarf was "like a hug for the recipient." She explained to Leslye that the women she served had never before received a personal gift, much less a handmade personal gift. The women were amazed that someone they didn't know would make something so beautiful for them.

Leslye felt like she had finally found her calling. She took her idea to a local yarn shop and asked the owner if she would sponsor her. The owner was more than willing, so they put up a sign inviting knitters to join them every Wednesday evening to make comfort scarves.

And people did. The yarn shop supported Leslye even further by asking her yarn suppliers to donate yarn for the project. And they did.

Leslye organized the donated yarn into kits, which her volunteers call "magic balls" because they become such beautiful scarves. She measured everything, coordinated all the colors, and then she started publicizing her project online.

The demand for the kits grew. Leslye also took them to local retirement homes, church groups and senior centers. Everywhere she went, people wanted to use the kits to make scarves for women in shelters. "I couldn't make kits fast enough," says Leslye, "but I had lots of scarves!"

Leslye started recruiting volunteers to make kits, wrap scarves and help ship them to the shelters. "Our volunteers are great," Leslye says. "They are so dedicated to our cause. They believe in it as much as I do." Some make scarves to honor family members. Some have been victims of abuse themselves and know what a comfort scarf would have meant to them on their road to a happy life. "For many of our volunteers," she goes on, "making the scarves is as meaningful to them as receiving the scarves is to the abused women who get them."

Many people find Handmade Especially for You via VolunteerMatch. They have volunteers from all over the U.S., a few from Canada, England, Scotland, and Germany, and Leslye attributes this to how many people VolunteerMatch reaches. "Being a member has definitely improved Handmade's ability to deliver so many comfort scarves to so many shelters for abused women," she says.

In 2008 Handmade made and donated 300 comfort scarves to 3 shelters for abused women. In 2009, their core group grew and they were able to make and distribute 6,500 scarves for 22 shelters. 2010 was a banner year. They received very generous yarn donations, established affiliates throughout the country and donated 10,000 scarves to 30 shelters in Southern Calif. They plan to reach more than 43 shelters with a total of 15,000 scarves by the end of 2011.

Leslye is uplifted every day by her work with Handmade. She always saw herself has a leader, someone who inspired others, but she thought that skill was confined to her business. "Now I see that it is my essence," she says. "I am idealistic and I can convert the ideals I believe in into positive action, and organize others to do the same."

When her family came for Thanksgiving, her granddaughters went through the boxes of scarves in her front hall sent from all over the world. They opened them, read every letter, and sat down afterwards to crochet bracelets for the ladies.

And the effect isn't just in Leslye's own family. They supply Craig County Jail with kits for their female inmates. The arts and crafts teacher says making these scarves helps her girls see that there are women worse off than they are.

What's on the horizon for Handmade? "I am just about at the limit of what I personally can do," Leslye admits. She spends all her time, between eating, sleeping and doing laundry, working for the organization. "At night I knit." So if Handmade is going to grow, they'll need more volunteers, a bigger workspace for the kit makers, and more money to ship the kits.

For Leslye, though, these are mere bumps in the road as Handmade becomes something even she couldn't have imagined when she first started knitting those scarves. "I could never have anticipated such joy in retirement," she says. "I thought working in my business was the greatest joy of my life. Now I think contributing to overcoming domestic violence, working with teens, working with seniors, etc. is even more satisfying."

Leslye often works with high schools to help their students fulfill public service requirements for graduation. Once she taught knitting to a group of 65 teens, boys and girls, from YouTube videos. The kids went home and talked about this with their moms or grandmas. They had a new connection to them.

"I could go on and on about Handmade's fabulous volunteers and the meaning of participating in Handmade for all who do so," Leslye says. "But I have to get back to making kits for crocheters."