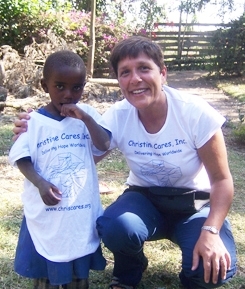 Chris Cares, Inc. is a volunteer-run nonprofit based out of the United States and Tanzania. They offer support to a group of 15 women to market hand-crafted fair trade goods, and are organizing a school construction projects to alleviate poverty through education.

When Christine Lott turned 40, a small, previously quiet thought in the back of her mind pushed its way forward: To feel truly fulfilled, she had to do something to give back. She began volunteering with her local church. She completed a 250-mile bicycle ride from Key West to Palm Beach to raise $50,000 for LifeTeen. Still, she knew she could do more.

When she wasn’t putting in 12-hour days on Wall Street, she started spending her vacations on international volunteer programs. She traveled to Sri Lanka to assist with disaster-relief after the tsunami in 2006, and in the summer of 2007 she went to Tanzania.

She lived with a Masai family in a village called Ilbrou and immersed herself in the culture. “The first time it was more or less a novelty,” she said. “We had no electricity; no running water. We took every day as a new experience and cherished our time there. Little did I know it would become my life.”

After attending a Sunday mass, which was confined to a school classroom, the Father of the congregation led her to an open plot of land and said, “This is where our church will be one day.” She made a promise to him on the spot to make that dream a reality.

After returning to the U.S., Chris chose to start her own nonprofit. “I founded Chris Cares because we had a set objective at first,” she said, “we wanted to ensure that all of the funding went to ‘our’ projects.” She came up with the Buck a Brick campaign to raise money for the church construction, asking for a dollar donation from friends and family.

After gaining momentum, she started pitching it to everyone she encountered — some donated as much as $100. Goldman Sachs helped with a matching gift donation program, and through a bit of savvy networking the campaign soon went viral. The total reached $50,000, and within two years the Church of St. Judas Thaddeus celebrated its opening mass.

As she was becoming more invested in philanthropy work, Chris was suddenly struck by change. “Ironically, six weeks prior to the church opening, I lost my career in the financial crisis,” she said. “One door closed, and the nonprofit I founded two years before needed a full-time director.” She plunged in head-first.

She signed up for a class in nonprofit management and spent the next two-and-a-half years bringing her organization to the next level. She registered her nonprofit in Tanzania, assembled a board of directors, applied for grants, planned fundraising events, and implemented a social media outreach campaign to raise awareness.

“Volunteers are the center of everything we do,” Chris said. The board is fully-staffed by volunteers, and she herself puts in over 60 unpaid hours per week, spending up to five months at a time in Tanzania as a coordinator — she’s even learning some Swahili.

They are currently working to raise money to build the School of St. Nicholas. “Governmental schools in Tanzania have over 100 students in a classroom, no books, no pencils, and often no teachers.”

Chris wants to provide children access to a quality education and give them the chance to succeed. Right now they have an office, two acres of property and a septic system, but will need to raise $100,000 to begin building in January.

Chris uses VolunteerMatch to connect with people to run concession stands at the Gillette Stadium in Massachusetts. You’ll find her behind the counter at every event, right alongside the 10 volunteers. “I feel it is important to roll up your sleeves and work side-by-side with them.”

Chris is also organizing a series of Barefoot Walks on the East Coast next year. Participants will walk a mile without shoes to share the experience of people in Africa, who walk many miles each day through hazardous terrain. The money will buy much-needed construction materials and school supplies for the St. Nicholas project.

The scope and ambition of Chris Cares is truly amazing, considering it started with one woman’s dedication. Chris received the Stay Classy Volunteer Award in 2010 in recognition of her accomplishments. She went from Wall Street to a dusty street in Tanzania, where she found her calling to help others.

“My hope is renewed every day in some way,” Chris says. “It is sometimes the little things that mean the most. An email of encouragement, someone seeing the passion in my eyes when I talk about our project. These are the successes.”

Jesse Fineman is an intern at VolunteerMatch. You can reach him at jfineman@volunteermatch.org.