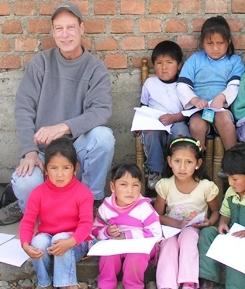 Changes for New Hope reaches poor and underprivileged children and their families in the Peruvian Andes. Initially developed as an English language program, CNH has expanded to address hunger and health issues in Huaraz, Peru.

Check out Changes for New Hope opportunities at VolunteerMatch.

After twenty years of working in sales, Baltimore native Jim Killon was so moved by the poverty in South America that he spent his life savings to start an organization to improve the livelihood of Peruvian children and permanently relocated to Huaraz, Peru.

When he first arrived in Peru in 2008, Jim was not intending to start his own organization. But when he began working as a volunteer coordinator at an NGO, he was immediately disappointed with the way the organization was run. Disillusioned with the corrupt way funds were allocated and the volunteers who seemed more interested in partying than helping, Jim decided that he needed to do more.

"I was not content to help a handful of children with their homework and send them on their way…These children wore rags; shoes were literally falling off their feet. They were suffering from malnutrition. Their hair felt like straw," Jim recalls.

So in 2009 he began Changes for New Hope, a nonprofit organization focused on providing Peruvian youth opportunities and hope for a better future. "We had to start from scratch," he says. "Respect for themselves and each other became part of the program. Those who arrived simply for the hand-outs left as soon as they realized this was more than a give-away program. We were left with children who wanted to develop themselves into young men and women one day."

As a start-up nonprofit in a foreign country, Jim faced challenges that to most people would seem insurmountable. "I had no idea how to read a menu or make a phone call," he says. "The culture and customs were all alien to me. When people told me they eat guinea pigs as food I thought they were kidding. When I found a chicken foot in my soup I was sure it was a prank... I was told I could never succeed."

For Jim, the solution to the challenges he faced was passion. "My tenacity drew others to the project and we developed a solid base," he says. "Spanish can be learned, obstacles can be overcome. Naysayers go silent in the face of determination and success."

Jim spoke at language centers and universities in Peru to encourage more people to donate and volunteer for the cause. Local poster campaigns and testimonials from previous volunteers helped the project gain credibility and fodder.

Jim's passion is obvious to everyone around him. According to Marlie Ferron, a former volunteer with Changes for New Hope, local Huaraz residents refer to him as "Crazy Jim."

"Not crazy as in psychopath or lunatic, or out of his mind, but crazy as in one in a million who dropped his life in the United States to come to Peru and just do his best with what he could, no questions asked," Marlie writes on the CNH blog.

Whereas three years ago, Jim's life was about the big-city grind, he now spends his days teaching children about the nature that surrounds them and facilitating games of "Gringo Bingo," an English vocabulary game. He does art projects with the children, some of whom have never been able to draw with crayons and paper before.

At its inception, Changes for New Hope only reached one group of children, but now Jim works with three groups – about 90 children total. And that number is constantly growing. The program continually adapts to the different teaching styles and hobbies of its volunteers. Jim notes, "Each volunteer has some skill or ability that the children have yet to experience or try. The children are eager learners now and embrace new faces."

With the invaluable assistance of volunteers from the US, the UK, Australia and more, Changes for New Hope is able to add new ideas, projects, learning games and choices as materials and donations allow.

Jim hopes that in future years, Changes for New Hope will be able to engage Peruvian families to create sustainable business models to raise themselves out of poverty. He hopes that future generations will be able to give their children more than they had as a result of Changes for New Hope. "Mostly, I am happy to see that, while poverty continues, the desperation mentality is slowly melting away… When people realize opportunities are available, hope replaces despair," he says.

It is clear that Jim's life has changed as a result of moving to Peru. He lost 60 pounds after living on a Peruvian diet. He's forgotten what "turning on the heat" means. He hasn't driven a car in almost three years. But Jim wouldn't call these changes sacrifices.

"I think that had I ever viewed it as a sacrifice, I may have been tempted to throw in the towel and head for a beach in Hawaii," he says. "The reward for me was seeing the results and development of the children and their families."

Jim's multifaceted efforts have transformed his life, but he describes it as a "win-win endeavor" that has opened his heart to the beauty and reward that comes from helping others.

"No one is telling me to go home anymore," he notes. "This is home for me now."

Laura Weiss interned with VolunteerMatch during the summer of 2011.