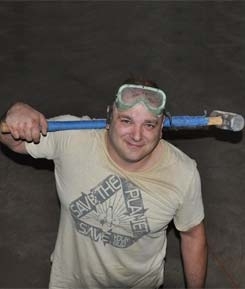 Project195 strives for a better global environment and economy.  The organization educates those who share their goals and spearheads projects that will reduce the damage that this and future generations will face.  Over the past two years, Project195 has organized and led community clean ups, held public forums on water conservation, and filmed a television show about green tips around the home.  They organize an annual Katrina restoration trip which is more successful each year.

Check out Project195 opportunities at VolunteerMatch.

Where does inspiration come from?  For Dave Skoblar and friend Pat Tirri, the idea for their organization was born at a humble kitchen table in Oakland, N.J., in 2008.

Project195 is an action-based eco/humanitarian nonprofit.  It was named for the 195 countries recognized by the United Nations, to emphasize the point that all countries can have access to the organization’s aid, whether environmental or humanitarian.

While Dave and Pat first gave the idea for Project195 serious thought in Dave’s kitchen, the bold decision was the next logical step in a process that had began three years earlier, in the terrible wake of Hurricane Katrina.  Dave and Pat watched with the rest of the nation as the waters rose and lives were destroyed.  Moved by the images of devastation and overwhelming misery, they felt compelled to act.

And they did.  Since its inception, Project195 and its volunteers have led several trips to the greater New Orleans area to assist in Katrina restoration, and have helped rebuild four homes and one church there so far.  They represent a growing trend of small, effective, independent organizations springing out of the grassroots to meet community disaster relief needs.

Why did they set up a totally new organization?  Dave explains, "We studied a lot of charities, and even though we thought many were admirable, even fantastic, we knew that we could make something unique and special.  A charity that would not only champion the Earth, but the people who live on it."

In its short existence, Project195 has been busy.  As one recent new member eloquently exclaimed, "You've only been around for two years? You've done more in two years than most charities do in a decade!"  Over the past two years they have organized and led community clean ups, held public forums on water conservation, and filmed a television show about green tips around the home (produced by Crazy Elk Productions).

So what’s next?  Leading teams to New Orleans, Haiti, and Ghana to help combat hunger, thirst, and famine.  This fall, Project195's mission is to give much needed relief to wetlands, bayous, and their natural inhabitants which have been devastated by the recent BP oil disaster in the gulf of Mexico.

Hard work and above all a passion for what’s involved have made this organization successful.  Without passion, the results would be "middling at best," Dave explains.  In managing his volunteers, Dave remembers his own experiences as a volunteer.  He says, "I talk to every single volunteer and member personally before any project.  Not only to discuss their strengths and weaknesses pertaining to a specific job or detail, but also through talking with a person, you find what they would be most happy doing."

Dave is obviously a great volunteer recruiter and manager, and Project 195 always has several active opportunities on their VolunteerMatch profile.  He says that through the site, Project195 has gotten not only a high quantity of volunteers, but high quality, which has helped them be so effective in their work.

Dave sees Project195 as one large extended family where everyone is proactive, involved and not afraid to get their hands dirty.  If it ran any differently, "I don't think we'd be as nearly successful," he concludes.

Rebecca Hunt is a communications intern at VolunteerMatch.