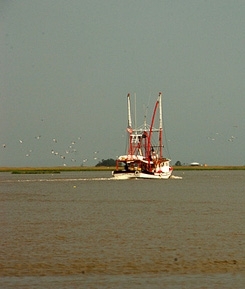 The Louisiana Bucket Brigade is an environmental health and justice organization working with communities that neighbor the state's oil refineries and chemical plants. By distributing an EPA-approved "bucket" to help communities take air sample, and providing citizen reporting systems for oil spill recovery, the organization assists residents in their fight to reduce pollution and protect public health.

Nearly everything we consume comes with hidden costs – but what if those costs make us sick?

With oil fuming from a hole 5,000 feet below sea in the Gulf Coast, it’s a question that’s on many people’s minds these days. But it’s certainly not a new one. In fact, one of the most compelling stories of this most recent toxic event – the efforts of a scrappy nonprofit in Louisiana to transform citizen reporting into a solid case against BP – has  strong ties to another well-known instance of petroleum industry pollution.

It was 1995 and fumes from a nearby petroleum refinery had sickened California attorney Edward Masry and many of his neighbors. After he was told by local, state and federal authorities that little could be done because the current set of monitors weren’t detecting problems, Masry commissioned an environmental engineer to develop a low-cost device – a "bucket" – that anyone could use to measure the toxins in the air.

Masry later became famous as the lawyer in the film Erin Brockovich, where he was played by actor Albert Finney.

Since its development, the bucket has been introduced to communities throughout the nation, though the greatest success story has been in Louisiana, where Louisiana Bucket Brigade has been helping to empower citizens to keep tabs on the output of dozen of  industrial factories in the states so-called "cancer belt."

These days the organization is in the limelight for another low-cost, high-impact program – an online map that makes it easy for anyone in the Gulf Coast to report on the impact of the BP Deepwater Horizon oil spill.

Developed with students at Tulane University, the Oil Spill Crisis Map uses the Ushahidi open-source map platform which has also been used by communities to map instances of violence in Kenya's post-election, damage during the Haiti Earthquake, and crime in the city of Atlanta.

With the map documenting sights where effects of the spill can be detected, be they social, environmental, or otherwise, the Louisiana Bucket Brigade hopes to give the recovery workers a comprehensive blueprint of the areas to address and ensure that no affected area goes overlooked.

"You hear one anecdote and then another anecdote, but hopefully this will give a more global perspective," Anne Rolfes, who founded Louisiana Bucket Brigade in 1999, recently told the NY Times. "This is a tool for all of us to understand the extent of the damage."

Since its creation, more than 1,000 reports have been logged, it provides at a glance a sense of the severity of the crisis. Recent reports included tarballs from New Orleans to Pensacola, Fla., strong odors, decreased tourist activity, and sightings of dead sea turtles and other wildlife.

Sofia Curdumi, Project Coordinator from Tulane, has said that though the organization is working on documenting the spill, there are still limited opportunities assisting with wildlife and cleanup efforts as those opportunities require skills beyond the organization's capacity. For those interested in helping with these aspects of relief, she recommends checking out the Louisiana Bucket Brigade's resource page, which lists organizations involved in relief efforts.