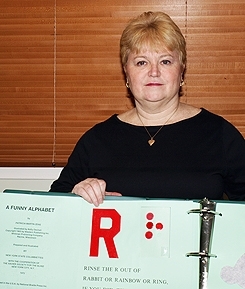 The Transcription Program for the Blind provides educational aids and grants to the visually impaired and their families and teachers.

A project of the Columbiettes of New York, the women's division of the Knights of Columbus, the Transcription Program for the Blind has been providing resources since 1972. Recently, it was granted a 501(c)3 nonprofit status through the leadership and dedication of Micki Magee.

To learn more about the program and how you can help, send an email to NYSCC.TPFTB@gmail.com

She wishes she could say that she started volunteering because she wanted to. But as Micki Magee puts it, "the truth is, someone asked me to join and I said okay!"

It was almost 27 years ago in Brooklyn, New York when Micki was invited to join the Columbiettes, the women's division of the Knights of Columbus. Each week, the ladies met in the evenings to work on various charitable projects, but it was one project in particular that stood out to Micki: The Transcription Program for the Blind.

Started in 1972 by the Columbiettes, the Transcription Program for the Blind provides educational aids and grants to the visually impaired. Among the services offered is the creation of a three-dimensional alphabet book, "A Funny Alphabet," to help young children learn to read in Braille. The handcrafted books are free to any parent, teacher, or school that requests one, and are assembled using a variety of recycled and donated materials -- old scarves, yarn, zippers, to name a few. In addition, the book comes with an accompany audiotape so that students can read along.

When Micki joined the Columbiettes, creating pictures for the book was her first task. "I began cutting and pasting two eyes and a nose on bunny rabbits," Micki recalls.

But from there, her work with the program quickly grew. Within months, Micki went from assisting with the assembly of the book to serving on a committee that awarded grants to individuals in need of additional educational tools, such as Braille computer programs and keyboards.

"We assisted one young man with a yearly grant throughout high school and college," says Micki proudly. "He has since become a successful lawyer."

Over the years, the success of the book continued to grow and the Columbiettes began receiving requests from all over the world. With these requests came more support for the work they were doing. Even more donations, both money and materials, started pouring in. And then in 2007, Micki had an idea.

As the newly appointed New York State President of the Columbiettes, Micki contacted an attorney who helped her incorporate the program and eventually turned it into a 501(c)3. "Now we can allow our contributors a tax break for their donations, and we can request grants from major corporations who have foundations," says Micki.

So, what does Micki attribute her dedication to? "If I had been told 27 years ago that I would be the president of a nonprofit with a full-time job and still be an active wife, mother and grandmother, I would have said 'yeah, right!'"

But it helps to have the support of her employer. For the past fifteen years, Micki has worked in mutual fund services for Prudential, a VolunteerMatch corporate client. Prudential's employee volunteer program gives Micki time each month to focus her energies on her nonprofit. And beyond paid-time off to volunteer, Prudential offers Micki other services to help her succeed. "I've attended several Prudential-hosted sessions and webinars that have given me the knowledge and tools to keep our program going strong," says Micki.

In fact, one of these presentations inspired Micki to take her nonprofit's program to the next level by creating a Spanish version of the alphabet book. "Not only will our book be useful for Hispanic children," says Micki, "but it can be used to teach Spanish to English speaking children. The possibilities are endless!"

In 2009, Micki was awarded a Prudential CARES Volunteer Grant, all of which went to purchasing supplies for the books. And though 5,000 books have been delivered to children and teachers all over the world, the real motivation for Micki's work is less quantifiable.

"One of my children is hearing impaired and I know what a struggle it was to go through agencies and red tape to get her any type of resources," says Micki. "Being able to give parents a resource for free is all the reward I need."