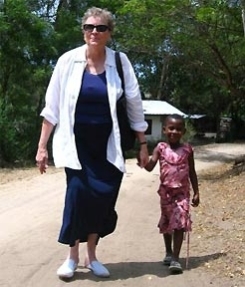 Eastern Regional Family Resource Network works with local groups in Grant, Hampshire, Hardy and Pendleton counties of West Virginia to support families in achieving self-sufficiency and personal well-being through networking and education. FRNs are nonprofit community-based organization made up of concerned citizens who work together to make their communities a better place to live.

It's not surprising that Mary Smith wound up in the Alleghany Foothills of West Virginia. This is a woman who likes to be on the move.

Over the years, Smith (pictured above on a recent trip to Africa) has worked for FEMA, done a project for Earthwatch, volunteered in the Peace Corps in Kazakhstan, and been a foster parent. She's done so much traveling, in fact, that her kids affectionately call her "Nomad" and "The Gypsy".

Today Smith, 72, is in Romney, West Virginia, far from her Texas home and her family and grandchildren, and she couldn't be more pleased.

As an AmeriCorps volunteer, Smith is with the Eastern Regional Family Resource Network as a VISTA Leader, helping local agencies and nonprofits form projects and become sites that can use other VISTA volunteers. In partnership with its VISTA volunteers and leader, the Family Resource Network is helping local families get the support they need to grow and thrive in one of the nation's most economically-troubled regions.

"I love to travel and knew that I would be leaving Texas to do my 'tour of duty,'" recalls Smith. "I liked the idea of having an eight-county area to work in and a variety of things to do – and I like that the Resource Network is interested in all kinds of services for families and children."

Like many communities across the nation, Romney is struggling. Here the average household makes just $22,000 a year, and nearly a quarter of its residents are below the poverty line.

Family resource centers play a crucial role in rural communities such as Romney. By helping to coordinate family services from area CASAs, AmeriCorps offices, United Way chapters, health agencies, and other nonprofits, the centers help assess needs and mobilize support where and when it's most needed.

Which makes Mary, newly arrived, an important representative of the local community's eyes and ears. Through its AmeriCorps grant, the Family Resource Center is receiving resources to recruit and support 17 VISTA volunteers in all in ranging from setting up service-learning curricula at local colleges to preserving Happy Retreat, a historic home built by one of President George Washington's brothers.

"In some cases it's just words, but I've been lucky enough to get connected with an organization that not only talks, but also works," said Smith. "I can see the fruits of my labor and I like that."

A big part of that work requires the skills of a talented manager. A retired professional, Smith worked for the State of Texas at the Department of Human Services for 32 years and at the University of Texas Extension Division for another ten. She retired in 1998.  Both these positions were in administration.

She says her supervisor, Amy Pancake, the organization's director, recognizes the management challenges and gives her the right mix of freedom and support she needs to succeed.

"Finding skilled volunteers has been hard for the VISTA project here in the Eastern Panhandle," she said. "People here are poor and often must work to support themselves. But we keep working at it and keep adding good resources -- like VolunteerMatch -- to our kit bag and we make it work."

Smith began using VolunteerMatch to learn about new personal volunteering opportunities after she came back to Texas from her time in the Peace Corps. Now she's on the other end -- using the service to recruit volunteers.

"VolunteerMatch has been very helpful to me here in West Virginia," she said. "Amy and I wanted to do a Web site redesign and of course a nonprofit has no money to get those kinds of things done. I was astounded by the number of applicants I got from VolunteerMatch. I finally had to take the announcement off as I could not cope with the number of people willing to help.  I chose a young man who lives just outside Philadelphia to work with us, and I can't sing his praises enough."

Has being in West Virginia made an impact for Smith? Absolutely. From a purely selfish point of view, she gets to travel, make new friends, see interesting sites, and have new experiences – all while helping people.

And while her family did have some concerns about her traveling from Texas for the role, she says those concerns were less about anything bad happening to her than about the possibility that she wouldn't be completely happy with her new job.

Smith says those worries are now far behind her. Between the dedicated team at Family Resource Network and the great families she has met, there's a lot to like about being in Romney.

"I have come to love this town and the people and see how hard they are working to make services available for the people who live here," she said. "I may just decide to stay here."