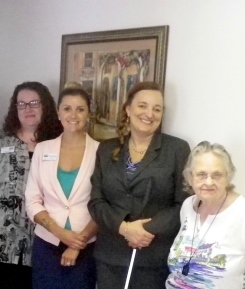 A Beacon for the Blind & Visually Impaired

January is National Braille Literacy Month. The name honors Louis Braille — a blind inventor who created the system of raised dots to help people with total or profound vision loss read and write.

While Braille was introduced in the United States in 1869, it wasn’t officially recognized until 1932. From that point into the early 60’s, many blind children were taught to read and write using Braille. Unfortunately, from 1965 on, Braille literacy declined. Today, less than 10% of the 1.3 million blind people in the United States read Braille.

The reason? Most public schools can’t afford to hire or train Braille teachers. And with the notion that modern technology — such as audio books and computers — is a substitute for Braille, many educators consider Braille to be unnecessary.

A community in Pasco, Florida, recognized the importance of Braille literacy services early on. In February 1983, following a town hall meeting that drew an overwhelming response, the Suncoast Center for the Blind and Visually Impaired was created — an organization committed to providing people who are visually impaired and blind with the skills needed to achieve their maximum independence. Their name later changed to the Lighthouse for the Visually Impaired and Blind.

Services are provided at no cost to clients thanks to the generosity of donors and volunteers. As a nonprofit, the Lighthouse team knows just how operation-critical their volunteers are. CEO Sylvia Perez says “volunteers bring [with them] a level of curiosity and enthusiasm.”

The Lighthouse provides people of all ages with training and services to help them and their families adjust to living with visual impairment. These include training in adaptive independent living, use of assistive technology for computers, phones, etc., orientation and mobility (i.e. use of the long cane), job readiness, and social groups.

“We’ve had teens raise money through pay-it-forward projects, and through involvement in their local civic school clubs,” adds Sylvia. “These teens have helped us put on events, such as a mini-Dining in the Dark fundraiser and our annual Beeping Easter Egg Hunt.” Lighthouse’s annual Dining in the Dark is also made possible by a group of dedicated committee volunteers.

Due to the nature of the Lighthouse’s work and the population they work with, direct contact with clients is limited. The organization relies on passionate volunteers who focus on creating awareness and resources, some of who even made the local news doing so.

Being literate is essential to succeeding in life. That’s why the Lighthouse’s mission is so critical. Learn more about their work, and explore volunteer opportunities with a Lighthouse in your community on VolunteerMatch.