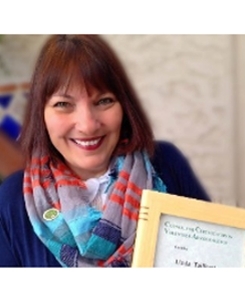 “Volunteers make such a difference to our organization, community, and the people we serve, by sharing their time, talent and love which infuses Catholic Charities with energy and passion,” says Linda.

With all of these programs and causes areas, there’s a lot of choices for potential volunteers. Volunteers fill roles from “Counseling Interns” to “Filing Ninja” to everything in between. Pictured left is Keshia, a volunteer videographer capturing client stories.

“My joy comes from helping a volunteer find just the right placement," says Linda. "We want every volunteer to feel that s/he makes a difference!”

One cause area that is important to Catholic Charities is homelessness. They run 5 programs aimed to alleviate homelessness in Arizona. They do everything from offering a safe place to shower, to finding housing, to offering treatment to those who are homeless and also struggling with addiction and mental illness.

Linda explains, “When you’re homeless and isolated, a day can seem endless without another person to talk to. The LOFT Day Drop-in Center in Cottonwood provides air conditioning in the summer, heat during the cooler months and a great place to socialize,  job hunt, and stay in touch with family by phone or email.”

One volunteer that stands out to Linda is Pat (pictured right). Why? Before becoming a volunteer, Pat was homeless himself.

As a former air conditioning/heat technician from Michigan, Pat watched his 26-year-career come to an end after a back injury and then faced divorce after 26 years of marriage. Through a series of events, he ended up experiencing homelessness in his late 40s.

For Pat, loneliness was the worst part of experiencing homelessness. He worried about getting water and food, showering, figuring a way to move on with his life—but the lack of human contact felt maddening.”

“If you’re alone enough, especially if you’ve had some traumatic experiences, your mind can go to some dark places,” says Pat.

Living out of his car for eight months, Pat found his way to Catholic Charities’ The Loft, a day center reaching the homeless population in Cottonwood, Ariz. When he first arrived, it was difficult to assimilate back into society.

“I was closed off,” says Pat. “But then I got a support system and started meeting people, and it helped me to open up.”

He immediately used the shower, kitchen and laundry services. Staff helped him to come up with a plan, and in six months, he moved into an apartment. He also got support to address health issues. Then, he took another big step and enrolled in Yavapai College to start a new career in education.

Now, he also volunteers at The Loft to help others. "I like working here, because at one time, I was in the same situation as the people that visit here," says Pat. "I know how much this drop-in day center helps people… I wouldn’t be surprised if this place has saved lives."

Pat comes in early to start the coffee, turn on the computers, launder the towels and restock the bathrooms. Then, when people start coming in, he provides a friendly greeting and guides them to needed resources ranging from food to staff support.

“Usually, when people come here, it takes them about a month to warm up to people,” says Pat. “They don’t have much to say. But once they get connected, it becomes a community.”